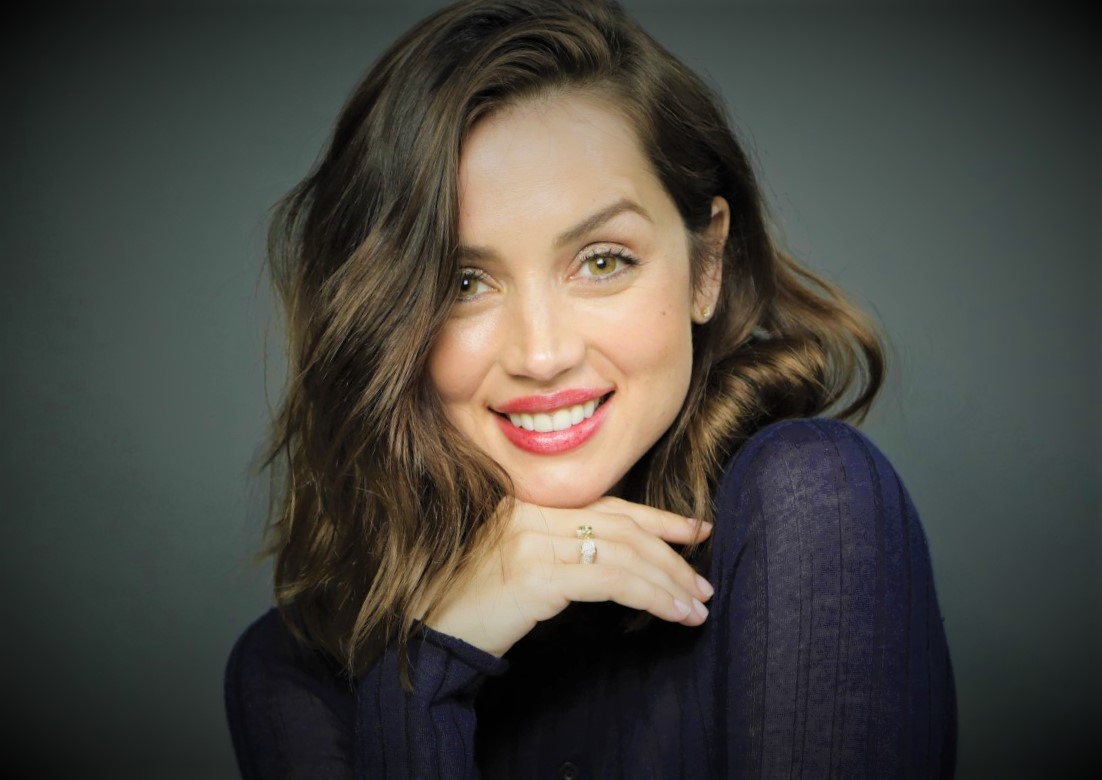 The Cuban-Spanish actress Ana de Armas began her acting career with her lead role as Marie in the 2006 romantic drama Una rosa de Francia, as a teenage actress. At the time, she was eighteen (18) years old. This was her most notable role in any Cuban production. Ana de Armas soon caught the eye of producers and filmmakers for her beauty and talent. She is known as one of the sexiest, hottest, and most beautiful actresses in the world and has appeared on many ‘Hot Actresses’ lists. She has received several awards and nominations for her roles, including a Golden Globe Award nomination. Ana de Armas is one of the top growing and getting successful and famous actresses in Hollywood.

She has appeared in several English-language Hollywood movies and is considered one of the sexiest young Hollywood actresses. Her most famous roles in Hollywood movies are; Bel in Knock Knock (2015), Iz in War Dogs (2016), Felicidad Duran in Hands of Stone (2016), Joi in Blade Runner 2049 (2017), Marta Cabrera in Knives Out (2019), Andrea Rivera in The Night Clerk (2020) and more.

Ana de Armas was born to Ramon and Ana in Havana, Cuba on April 30, 1988. Her father Ramon worked at different jobs such as deputy mayor of the town, a bank manager, a school principal, and a teacher, and her mother Ana worked in the human resources department of the Ministry of Education. She also has a brother who works as a photographer in New York. Though she spent her childhood in Cuba which had a fuel shortage, electricity blackouts, and food rationing problems, she has said that she has lived a happy childhood.

In 2000, when she was only 12 years old she had already decided that she wanted to become an actress. She used to go to her neighbor’s apartment to watch Hollywood movies as her family did not own a DVD or Video player, and used to practice acting by memorizing and doing monologues in front of a mirror in her room. At the age of fourteen (14), she tried her luck and auditioned to join the National Theater School of Cuba, in Havana and was accepted. The school was far away from her house so she used to travel by bus or hitchhiked every day to go to the school and attend the course (class).

She filmed three films while in the drama school but left the school in the final year as she knew that she would have to serve at least three years of service to the state as mandatory by law for every Cuban graduate. After leaving school she went to Spain to pursue an acting career. She had Spanish citizenship through her maternal grandparents.

The Cuban actor Jorge Perugorria met Ana de Armas at a birthday party with his daughters and suggested to the director Manuel Gutierrez Aragon that he should cast her in his film. So in 2006, she appeared alongside Alex Gonzalez in Manuel Gutierrez Aragon’s romance-crime drama Una rosa de Francia (2006) which introduced her as a talented young actress. The director told her during the interview that the role was hers. Then she went to Spain and traveled across the country to promote the film. During her tour, she met Juan Lanja who later became her Spanish agent.

In 2007, she appeared in two films; in El Eden Perdido (2007) in the lead role, and in Madrigal (2007) in the supporting role. Both of these films were shot at night as they had not taken permission to cast her in these films from her tutors at the drama school. Ana de Armas moved to Madrid, Spain at the age of eighteen (18), and met the casting director Luis San Narciso who loved her work in Una rosa de Francia (2006). Narciso cast her for the role of Carolina (one of the lead roles) in the Spanish teen drama El Internado (2007-2010). She worked in this drama for six seasons from 2007 to 2010, which made her popular and a young and beautiful celebrity figure in Spain.

She then appeared in several other Spanish movies such as in the teen-comedy film Mentiras y Gordas (2009), in horror film El Callejon (2011), in the drama film Por un panado de Besos (2014), and another horror film Anabel (2015). She moved to New York in 2010 to pursue a career in Hollywood and started to learn to speak English. After a few months of English language classes, she returned to Spain to play one of the lead roles in the historic-adventure drama Hispania (2010-2011) which consisted of three seasons. Then her Hollywood agent motivated her to move back to Los Angeles and do Hollywood films.

In 2014, at the age of 24, she moved to Los Angeles and started to find work in films. At the time she was not very good at English and barely understood what was going on during the auditions she went to. So she joined English language classes and spent four months in full-time education to learn the language.

In 2015, she made her Hollywood film debut with her role as Bel alongside Keanu Reeves in the horror film Knock Knock (2015). For this role, she learned her dialogues/lines phonetically. Her next lead role was in Keanu Reeve’s American thriller film Exposed (2016) which was produced by Reeves and others. Reeves starred in this film with de Armas. Reeves telephoned de Armas and offered her this role over the phone.

In 2016, de Armas appeared alongside Jonah Hill, Miles Teller, and Bradley Cooper in Todd Phillips’s black-comedy-crime film War Dogs (2016), as the wife of an arms dealer. Her English had not become fluent till now, so she had to learn her lines phonetically for this film too. War Dogs (2016) was a commercial and critical success. It grossed over $86 million against a budget of $50 million. And it holds very good ratings on online film rating websites; a 61% rating on Rotten Tomatoes, and a 7.1/10 rating on IMDb. She also appeared in the 2016 sports biopic drama film Hands of Stone (2016), as the wife of the main character, the boxer Roberto Duran. De Armas received very good reviews from critics for her performances in these films. Indiewire’s critic David Ehrlich commented that she is “memorable in a thankless role”, for her role in War Dogs (2016).

Rise to Prominence and Critical Acclaim

In 2017, Ana de Armas played the supporting role of Joi in the Sci-fi futuristic film Blade Runner 2049 (2017) alongside Ryan Gosling. She played the role of the holographic AI girlfriend of Gosling’s character K. Blade Runner 2049 (2017) was a critical and commercial success. It went to gross over $260 million on the box office against a budget of $150-185 million. And received a very good response from the critics and generated the highest ratings on the online movie rating websites such as; 88% on Rotten Tomatoes, 8/10 on IMDb, and 81% on Metacritic.

She received very good reviews for her performance in the film. The Guardian’s critic Mark Kermode wrote of her as “(she) brings three-dimensional warmth to a character which is essentially a digital projection”, and New Yorker’s critic Anthony Lane called her performance “wondrous” and also said, “Whenever Joi appears, the movie’s imaginative heart begins to race.”

Her second film in 2017 was the action thriller film Overdrive (2017) in which she played one of the lead roles of Stephanie, the love interest of the main character. She again was praised for her extraordinary performance. The Hollywood Reporter’s critic Stephen Dalton commented that “(she) radiates more kick-ass charisma than her thankless sidekick role might suggest.”

In 2019, Ana de Armas appeared in one of the lead roles in the blockbuster comedy-crime-mystery film Knives Out (2019). In this film, she played the role of Marta Cabrera, a caretaker/nurse. Initially, she was reluctant to play this role as she did not want to play a stereotypical Latina nurse role, but she agreed to play the part after realizing that her character was much deep. The film was a huge commercial and critical success. With its budget of $40 million, Knives Out (2019) grossed over $311 million worldwide. It holds very good reviews on online film rating websites. With its approval rate of 97%, it is one of the highest-rated films on Rotten Tomatoes.

Ana de Armas is a Cuban by birth. She moved to Spain at the age of nineteen to pursue an acting career. And then moved to Los Angeles, United States to pursue a film career in Hollywood.

Her maternal grandparents are Spanish so she has a Spanish citizenship too.

When she arrived in Los Angeles to enter into Hollywood film industry, she could not speak English. In fact, she barely understood what was happening and what she was saying in her early auditions. De Armas took a full-time English language course to learn English.

De Armas has beautiful green eyes with a brown center.

She received a Golden Globe Award nomination in the Best Actress category for her role as Marta Cabrera in the 2019 mystery-comedy film Knives Out (2019).