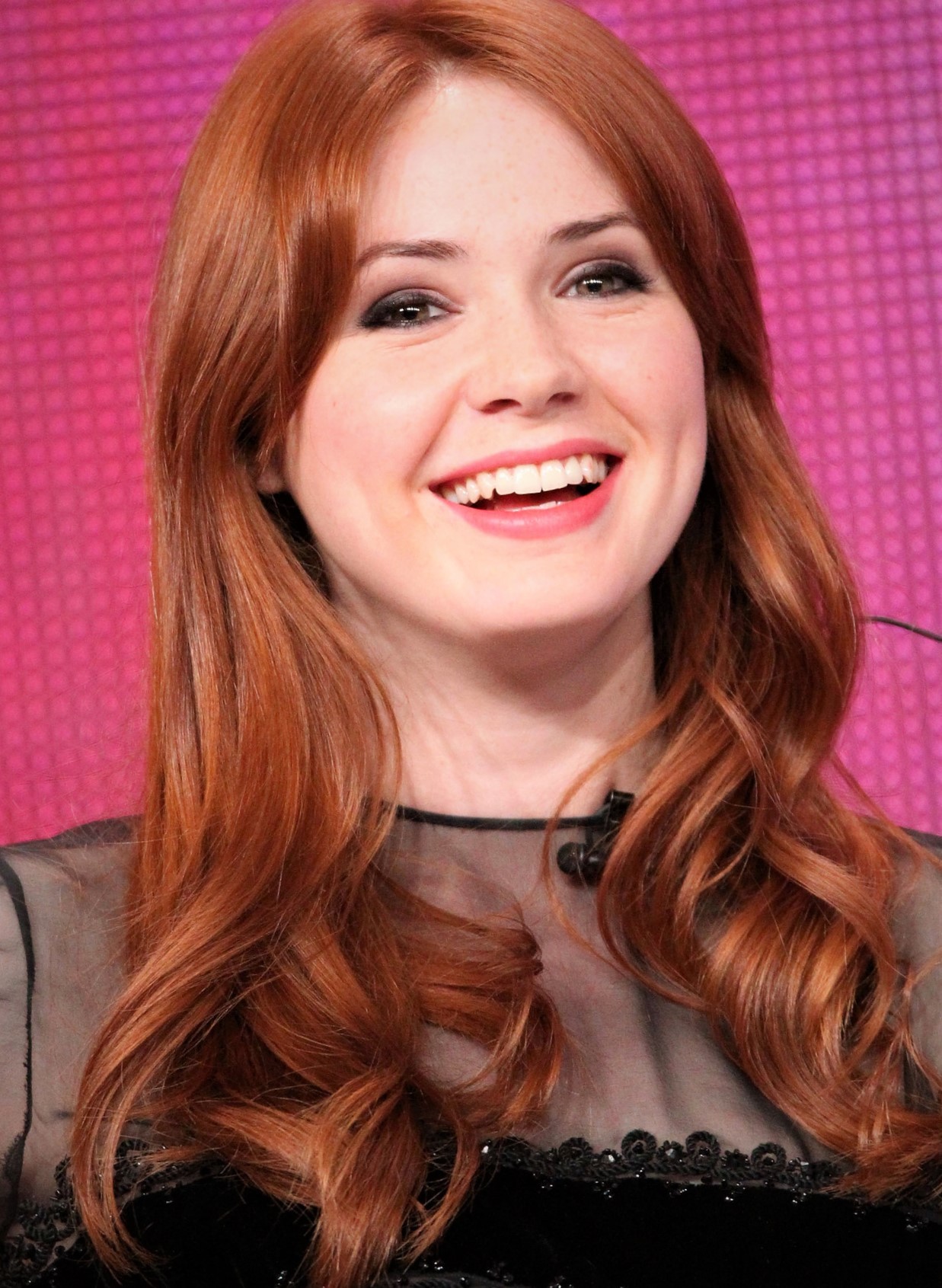 The Scottish actress, producer, director, filmmaker, writer, and former model Karen Gillan is one of the hottest and most beautiful and talented Hollywood actresses in the industry. Karen Gillan entered acting at the age of 16 and has since gained worldwide recognition for her work on television and in films. She has appeared in several blockbuster movies and has earned herself numerous awards and nominations from different local and international award shows. She made headlines with her extraordinary performance as Amy Pond in the BBC One television series Doctor Who (2010-2013). Her most recognized and admired performances are in; Outcast (2010), Not Another Happy Ending (2013), Oculus (2013), Selfie (2014), MCU films (2014-present), Jumanji series (2017-present), Beginning (2018), and more.

Karen Gillan has received several awards and nominations for her performances in TV and movies over the years including an Empire Award, a National Television Award, a Teen Choice Award, and more. She is also well-known for her activism work and public image and particularly is known for her suicide prevention work. Karen Gillan is Hollywood’s one of the most talented artists.

Karen Gillan was born to Marie and Raymond Gillan, on November 28, 1987, in Inverness (Scottish Highlands) Scotland. Though her parents were Catholic she was not baptized. According to Gillan, she does not practice any religion. Her family lived in the Kinmylies region of Inverness, where she grew up. She attended Kinmylies Primary School. Gillan moved to Edinburgh and got admission to Telford College where she attended an HNC Acting and Performance course, at the time she was 16 years old. In 2005, at the age of 18, she moved to London and got admission to Italia Conti Academy of Theater Arts. A modeling agency noticed her and hired her as a model.

In 2007, at the London Fashion Week, she appeared on stage as a model. Karen Gillan said in an interview that though she loved and enjoyed modeling she would never give up her acting career to work as a model, as acting has been her life-long goal and dream. Gillan moved to the United States in 2012 while she was working in the film Oculus (2013).

Karen Gillan made her television (broadway) debut in 2006, with her guest role as Teri Cotter in a crime drama by ITV Rebus (2000-2007). She has to drop out of school for this role. After that, she appeared in several other TV series as a guest star. Gillan then signed a two-year-long contract with Objective Productions as one of the cast members of the sketch comedy series The Kevin Bishop Show (2008-09). The show ran for two seasons. In this show, Gillan played multiple roles including several famous celebrities such as Angelina Jolie and Katy Perry. The Kevin Bishop Show has a rating of 6.3/10 on IMDb.

In 2008, Gillan starred as Ginny Turner in the British television film Stacked by Channel 4. In 2009, she played the lead role of Coll in the British television horror series The Well. The Well (2009) had several short episodes in which tell the story of four teenagers who accidentally discover a cursed well and release an evil spirit. The evil spirit now haunts them and kills one of them. They must discover a way to stop this spirit. Karen Gillan played the lead role in this series and received very positive reviews for her performance. The Well (2009) has a rating of 8/10 on IMDb.

Gillan then scored the role of Amy Pond in the renowned British sci-fi series Doctor Who in 2009. She soon became famous for her brilliant performance as Amy Pond. She worked in Doctor Who for two years and this proved to be her breakthrough role. Gillan won a Young Scot Award in the entertainment category for this role in 2010. She played the role of Amy in the sixth series in 2011 and in five episodes of the seventh series in 2012, after which she decided to leave the show. In 2013 she reprised her role as Amy Pond in the Christmas special The Time of the Doctor (2013).

She appeared in the 2012 television film We’ll Take Manhattan as Jean Shrimpton, a supermodel. John Mckay directed this film which follows the story of a sexual relationship between Shrimpton and a photographer David Bailey. The film received overall positive reviews, especially the performance of Gillan and her co-stars Aneurin Barnard and Helen McCrory received very warm reviews. The film holds a 48% approval rate on Rotten Tomatoes and a 6.7/10 rating on IMDb.

Karen Gillan made her film/movie debut with her minor role as Ally in the 2010 horror-thriller Outcast (2010). In 2013, she co-starred with Emun Elliot in the British romantic comedy film Not Another Happy Ending (2013). In this film, she played the lead role of Jane Lockhart. The director of the film John Mckay chose Karen himself as he had noticed her during the production of We’ll Take Manhattan, and had found her to be “a very bubbly, vibrant, energetic, funny, slightly clumsy person.” He thought that Gillan would be perfect for this role. The film and the lead actors received negative reviews. Gillan said on media that she loved working in a Scottish film which “isn’t about drug use or fighting the English.”

Her second film in 2013 was the supernatural horror film Oculus (2013). She played the lead role of Kaylie Russell, who becomes afraid of a haunted mirror and considers it as the reason for her family’s misfortune and death. Oculus (2013) was a huge box office success and received very positive reviews from critics. It grossed over $44 million against its budget of just $5 million. Karan Gillan’s performance as Kaylie Russell was very well-received. On the review aggregator, Rotten Tomatoes has an approval rate of 74%. On IMDb, it has a 6.5/10 rating and on Metacritic, it has a rating of 61%. She also appeared in TV shows; Time to Act, A Touch of Cloth, and NTSF:SD: SUV in 2013.

She made her American television lead role debut with her role as a modern-day socialite Eliza Dooley in the 2014-15 Warner Bros. Television season Selfie. In this series, her character is obsessed with modern social media. Though the series discontinued after airing seven-episode, the remaining six episodes were aired online on Hulu. Despite the fact that the show got canceled, it received very good reviews on online film and series rating websites such as a 7.2/10 rating on IMDb and a 59% approval rate on Rotten Tomatoes.

Her next appearance was in Marvel Studios’ superhero blockbuster film Guardians of the Galaxy (2014) in which she played the role of Nebula, a loyal lieutenant of Thanos and Ranon. This was a very challenging role for her, Karen Gillan had to shave her head bald for this role and it took more than four hours every day to apply the make-up for her character. The film premiered in July 2014, to receive a very warm response from the critics and a major box office success. With its budget of around $300 million, it went to gross over $772.8 million worldwide. It has a whopping 92% approval rate on Rotten Tomatoes and an 8/10 rating on IMDb.

Karen Gillan next appeared in a minor role in the 2015 biographical comedy-drama The Big Short (2015), which stars Christian Bale, Brad Pitt, and Ryan Gosling in lead roles. Her next project in 2015 was the 9-minutes comedy-drama Conventional, which she wrote, directed, and starred in herself. In 2016, she portrayed Ellen in the American western film In a Valley of Violence, which despite its critical acclaim failed to perform well at the box office.

Gillan reprised her role as Nebula in Marvel Studios’ superhero science fiction film Guardians of the Galaxy Vol. 2 (2017), which was also a huge commercial and critical success.

Her second appearance in 2017 was in the techno-thriller film The Circle (2017) which starred Tom Hanks and Emma Watson in lead roles. She played the supporting role of Annie Allerton and received very positive reviews for it.

Gillan’s third film in 2017 was the fantasy adventure-comedy film Jumanji: Welcome to the Jungle in which she co-starred with Kevin Hart, Jack Black, Dwayne Johnson, and others, and played the female lead role, Ruby Roundhouse. She went on to reprise her role as Ruby in the next Jumanji franchise movie Jumanji: The Next Level (2019). Both of these films were huge commercial successes and received generally positive reviews.

She also reprised her role as Nebula in other Marvel Studios’ movies; Avengers: Infinity Wars (2018) and Avengers: Endgame (2019). Both of these superhero movies came out back-to-back and were a major critical and commercial success. Karen Gillan received very good reviews for her performance in these movies. Gillan’s other great movies are; American drama film All Creatures Here Below (2018), buddy-cop comedy Stuber (2019), spy-comedy animation film Spies in Disguise (2019), and the adventure film The Call of the Wild (2020).

Karen Gillan will next appear in action thriller Gunpowder Milkshake, which will premiere on Netflix on July 14, 2021, and in the sci-fi thriller film Dual which will also premiere in 2021.