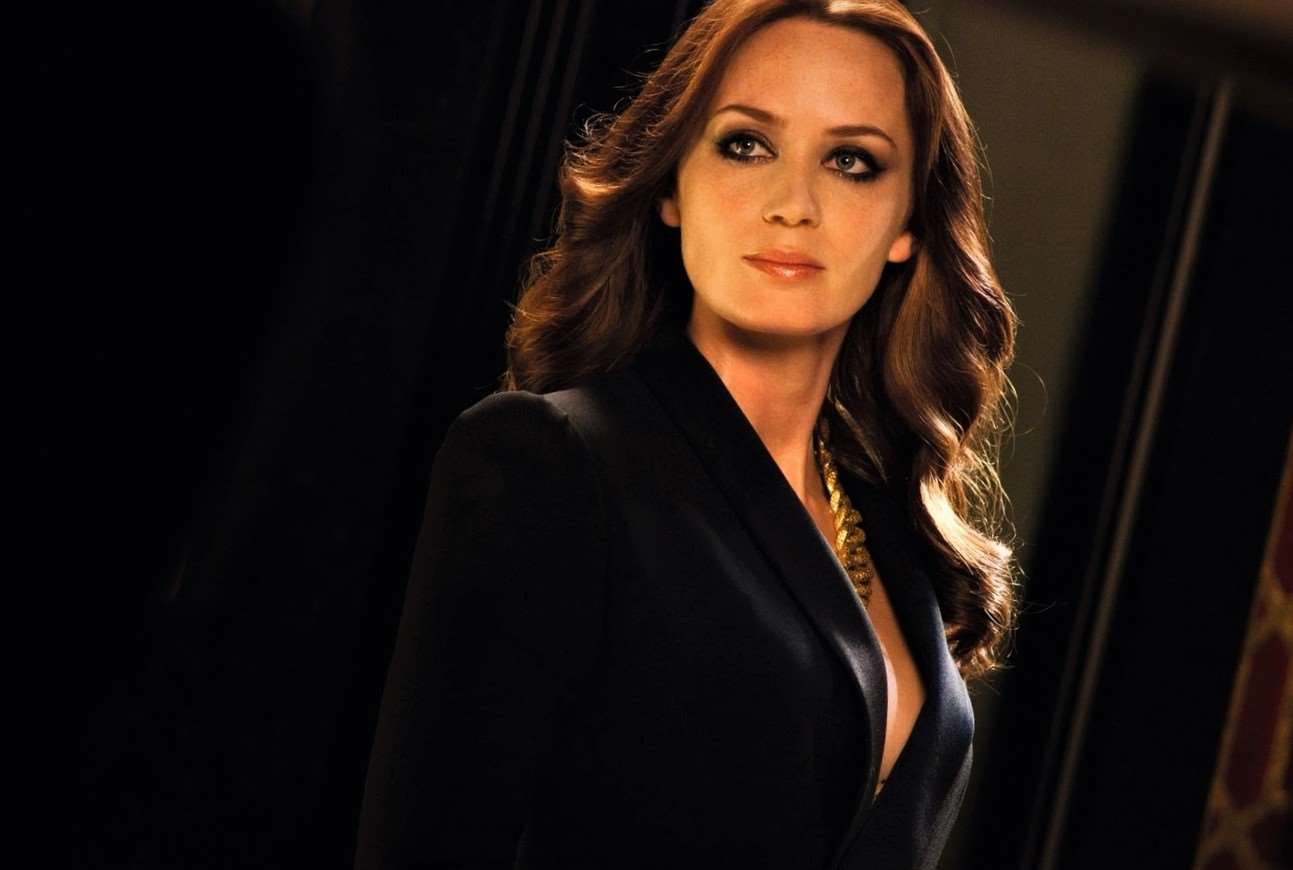 Emily Blunt, a Hollywood heroine, is one of the most glamorous, and beautiful actresses in the world, as well as one of the most talented artists in the industry. She rose to international prominence thanks to films like The Young Victoria, The Adjustment Bureau, Edge of Tomorrow, Looper, The Girl on the Train, A Quiet Place, and many others. Her breakthrough role was in the comedy-drama film “The Devil Wears Prada,” for which she received two nominations: a Golden Globe in the best actress in a supporting role category and a BAFTA Award in the same category. She received a Critics’ Choice Award in the Best Actress in an Action Film category in 2013 for her role as Rita Vrataski in Edge of Tomorrow, as well as a BAFTA Award in the Best British Artist of the Year category, among several other accolades. Emily Blunt is one of the most talented and admired British actresses around the world. With annual earnings of $22.5 million, Forbes rated her as the world’s sixth highest-paid actress, in 2020.

Her full name is Emily Olivia Leah Blunt. She was born on February 23, 1983, in Wandsworth, London, to Joanna, a teacher and former actress, and barrister Oliver Blunt, QC. She is the second of four children. Felicity, Sebastian, and Susannah are her siblings. Major General Peter Blunt was her grandfather, and Crispin Blunt, the Conservative Member of Parliament for Reigate, is one of her paternal uncles. Blunt struggled with stuttering from the age of seven to fourteen. She credits an acting coach with assisting her in managing her stutter. She also became a member of the American Institute for Stuttering’s board of directors. Blunt attended Ibstock Place School in Roehampton, southwest London, and then Hurtwood House, a private sixth form college in Dorking, Surrey, where he studied performing arts. She was discovered and signed by an agent when she was there.

Blunt made her professional debut in Peter Hall’s production of The Royal Family in November 2001, playing the granddaughter Gwen Cavendish to Judi Dench’s Fanny Cavendish. Blunt was voted “Best Newcomer” by the Evening Standard for her performance. In 2002, she starred as Eugenie in Nicholas Wright’s Vincent in Brixton at the National Theatre and as Juliet in Indhu Rubasingham’s Romeo and Juliet at the Chichester Festival Theatre. Blunt made her screen debut in the British television drama Boudica in 2003, which is based on the life of the ancient Celtic warrior-queen Boudica, who fought the Romans. In the same year, she received critical acclaim for her portrayal of Queen Catherine Howard in the two-part British television drama Henry VIII.

In 2004, Blunt received critical acclaim for her role as Tamsin in the independent British drama My Summer of Love, a love story set in the English countryside about two young women from different socioeconomic backgrounds. “Both Natalie and Emily were extremely different and very original, which is a rare thing nowadays,” director Pawel Pawlikowski said in an interview of Blunt and co-star Natalie Press. They stay away from the obvious and are capable of portraying nuanced and contradictory emotions.

Blunt played the troubled only child of New Labour spin doctor Gideon Warner in the British television drama Gideon’s Daughter, based on an original script written and directed by Stephen Poliakoff. In 2005, the film premiered at the Hamptons International Film Festival, and in February 2006, it was shown on British television. Blunt won the Golden Globe Award for Best Supporting Actress – Series, Miniseries, or Television Film for her appearance in the drama, the drama was also lauded for its overall “sterling performances.”

She then appeared in the comedy-drama The Devil Wears Prada, which is set in New York City’s fashion world. Emily, the senior assistant of Runway magazine editor-in-chief Miranda Priestly, was played by Blunt. The film was a financial and critical success, grossing $326 million worldwide. The Houston Chronicle’s Clifford Pugh said of Blunt’s performance, “[Blunt] has many of the movie’s best lines and steals nearly every scene she’s in.” For her performance, Blunt was nominated for a BAFTA Award in  Best Actress in a Supporting Role category and a Golden Globe Award in Best Supporting Actress in a Motion Picture category. She co-presented the award for best costume design with Hathaway at the 79th Academy Awards, in which they both appeared as their characters from the film. The next year, Blunt starred in the independent mystery drama Irresistible. Blunt’s popularity began to grow, and she starred in four films in 2007: Wind Chill, The Jane Austen Book Club, Dan in Real Life, and Charlie Wilson’s Battle, a biographical comedy-drama. Blunt starred in two films in 2008, the first of which was Sunshine Cleaning, in which she played Norah Lorkowski, an underachiever who begins a crime scene cleanup company with her sister Rose, played by Amy Adams. The film had its world premiere at the Sundance Film Festival in 2008, where it earned positive reviews, particularly for Adams’ and Blunt’s performances. She then starred as Valerie Brennan in The Great Buck Howard, which premiered at the same festival.

Blunt played Queen Victoria in the independent period drama The Young Victoria, directed by Jean-Marc Vallée and written by Julian Fellowes, in 2009. The film focused on her early life and reign, as well as her marriage to Prince Albert of Saxe-Coburg and Gotha. Blunt’s performance was lauded by critics, and she was nominated for many awards, including the Golden Globe Award for Best Actress in a Motion Picture – Drama and the Critics’ Choice Movie Award for Best Actress. Blunt won the BAFTA Britannia Award for British Artist of the Year the same year.

Blunt co-starred in the horror film The Wolfman in 2010, which was a revival of the 1941 film of the same name. According to the Los Angeles Times, the film received mostly negative reviews and was one of the biggest box-office flops of all time. Blunt did better in the thriller The Change Bureau (2011), in which she played a dancer who is “mysteriously kept apart” from a politician. The film received mostly favorable reviews, with critics praising Blunt’s chemistry with co-star Matt Damon. Blunt was offered the part of Agent Peggy Carter in Captain America: The First Avenger, but she turned it down, just as she did for Iron Man 2.

Blunt co-starred with Ewan McGregor in the British romantic comedy-drama Salmon Fishing in the Yemen, directed by Lasse Hallström and released in 2011. She portrayed a financial planner who enlists the aid of a fisheries specialist, played by McGregor, to help realize a sheikh’s vision of taking fly fishing to the Yemen desert, which leads to a spiritual journey for both of them. The film received positive reviews at the 2011 Toronto International Film Festival, Blunt’s and McGregor’s performances were also well-received by the public and the critics.

For her performance, Blunt was nominated for a Golden Globe Award in the Best Actress – Motion Picture Comedy or Musical category. In the same year, she appeared as Miss Piggy’s receptionist in Disney’s The Muppets and starred in the independent comedy-drama Your Girlfriend’s Sister.

Blunt co-starred with Jason Segel in the romantic comedy The Five-Year Commitment, directed by Nicholas Stoller, and co-starring Jason Segel, in which they played a couple whose relationship is strained as their engagement is repeatedly extended. While talking about this film New York Daily News’ Elizabeth Weitzman said, “Blunt has never been more relaxed, and she and Segel have a believably warm chemistry”. After that, she appeared in Rian Johnson’s science fiction action film Looper. Sara, played by Blunt, is a tough farm woman and single mother who supports a time-traveler and falls in love with him. The film premiered as the opening film at the 2012 Toronto International Film Festival, where it received a lot of positive reviews. In the same year, she appeared as the troubled Charlotte in Arthur Newman, a comedy-drama about a woman seeking to escape her past. The film received a mixed bag of positive, and negative reactions.

Blunt starred in Edge of Tomorrow in 2014, a film adaptation of Hiroshi Sakurazaka’s Japanese novel All You Need Is Kill. Sergeant Rita Vrataski, played by Blunt, is a Special Forces warrior tasked with training a public relations officer to battle extraterrestrial invaders. For her part, Blunt spent three months training, “focusing on everything from weights to sprints to yoga, aerial wirework, and gymnastics,” as well as practicing Krav Maga. The movie was a financial success, grossing over $370 and receiving good reviews, from critics and the public. Blunt received the Critics’ Choice Movie Award in the Best Actress in an Action Film category, for her performance in this film. Edge of Tomorow (2014) holds a 91% approval rate on Rotten Tomatoes, a 71% rating on Metacritic, and a 7.9/10 rating on IMDb.

After doing voice performances in the animated films; My Little Pony: The Movie, and Animal Crackers, she made her screen comeback in husband John Krasinski’s horror film A Quiet Place (2018), which follows a family who is tormented by monstrous monsters that chase by sound. She co-starred with her husband John Krasiski in this film. A Quiet Place premiered at the 2018 South by Southwest Film Festival, where it received critical acclaim. The film was a commercial success, and received a lot of good reviews, it grossed over $341 million worldwide.

In the horror sequel A Quiet Place Part II, Blunt will reprise her role, the film will be released on May 8, 2021. She’ll also feature in Jungle Cruise, a film adaptation of Adventureland’s eponymous attraction, Wild Mountain Thyme, a romantic drama based on John Patrick Shanley’s play Outside Mullingar, and Hugo Blick’s BBC television series The English, a western. In Jungle Cruise she co-stars with Dwayne Johnson.