Jemima Goldsmith; What’s Love Got to Do With It? 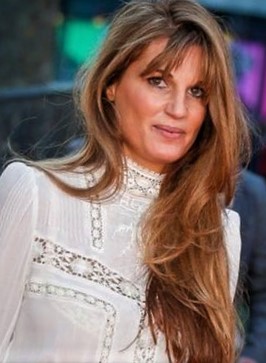 Jemima Goldsmith is a former journalist who is well known for her work in documentary, film, and television production. She also worked at The News Statesman, a British cultural and political magazine. She worked there as an associate editor. She also worked at the American magazine Vanity Fair, as the European editor-at-large. She was  Jemima Goldsmith used to write articles for different newspapers, she wrote op-ed articles for UK’s most prominent newspapers such as The Sunday Times, The Observer, and The Independent. She interviewed Pervaiz Musharraf, the Pakistani president, in 2008, at the eve of the elections. From 2008 to 2011, she used to be a contributing editor and a feature writer at the British Vogue. She also used to work as an associate editor for The Independent. The Observer’s Nick Cohen called Jemima the best editor that the News Statesman had since the 1970s.

Jemima Goldsmith was born on January 30, 1974, in London, England. She was born to Sir James Goldsmith and Lady Annabel Vane-Tempest-Stewart. James Goldsmith was the son of Major Frank Goldsmith, a former Conservative Member of Parliament, and a luxury hotel tycoon. And her mother belonged to an Anglo-Irish family and was the daughter of the Marquess of the Londonderry. Jemima Goldsmith has two younger brothers and a total of eight half-siblings.

She spent her childhood at Ormeley Lodge and used to go to the Old Vicarage preliminary and Francis Holland Girls School. She used to do horse-riding, and in her teen years, she was a successful horseback rider(equestrian) in London. She took admission into the University of Bristol in the English department in 1993, but upon her marriage to Imran Khan she dropped out. In March 2002, she completed her degree with upper second-class honours. And she graduated with a master of arts in Middle Eastern Studies from the University of London in 2003.

Jemima entered in TV productions in the mid-2010s, she appeared once or twice in different TV shows, such as Breakfast in 2005 and in ITV Morning News in 2006.

Goldsmith was the co-producer of the play Drones, Baby, Drones at the Arcola Theater which premiered in November 2016. It was directed by Mehmet Ergen and Nicolas Kent.

Jemima was the executive producer of the A&E Network’s documentary series The Clinton Affair, which was nominated for an Emmy award. It was a six episodes documentary, which was released in 2018. It was well-received by the public and it has good ratings. Jemima Goldsmith was also the executive producer of the docuseries The Case Against Adnan Syed, a crime story based on the murder of Hae Min Lee. it was released in March 2019 and was well received by the public. Jemima is also the producer of season three of the American Crime Story, which aired in September 2020.

She was raised an Anglican Christian, but she was also taught and made familiar with Jewish traditions, as her grandfather Frank Goldsmith was a German Jewish.

Jemima converted to Islam in 1995. In June 1995, She married Imran Khan Niazi, a former Pakistani cricketer, and the current Prime Minister of Pakistan. They had a Nikah ceremony in London, and later that month they had a civil ceremony at Richmond Register Office. She took Imran Khan’s last name and became Jemima Khan. She then moved to Lahore, Pakistan, Khan’s hometown. In Lahore, she learned Urdu and the Pakistani way of life.

Imran Khan entered into politics and became a member of the national assembly of Pakistan. After some time it became difficult for Jemima to adapt to the political life of her husband. So after 9 years of marriage, they had a divorce in 2004 and Jemima moved back to London. Jemima kept her last name as “Khan” until Khan married Reham Khan in 2014. Imran Khan still has good relations with Jemima and her family, he stays at Jemima’s mother’s home in London when he visits his sons. Khan has stated that the six months after their divorce was the hardest time of his life.

What’s Love Got to Do With It?

Currently, Jemima Goldsmith is working with Shekhar Kapur on her upcoming film What’s Love Got to Do With It?. This is an upcoming British Romantic Comedy which is supposed to be Jemima’s take on her married life with Imran Khan, set between South Asia and London. It will be Jemima’s first rom-com(romantic-comedy) film. The story of What’s Love Got to Do With It? is based on Tina Turner’s song of the same name.

The story of What’s Love Got to Do With It? is written by Jemima Goldsmith, and she is also the producer of the film, along with Tim Bevan, Eric Fellner, and Nicky Kentish. The Indian filmmaker Shekhar Kapur is the director of this film. Shekhar Kapur was the director of the 2007 film Elizabeth: The Golden Age, which won an Oscar in 2007. Pakistani star Sajal Ali is also in the cast of the film, it will be her debut in an international film.

Working Titles Films and Jemima’s Instinct Productions are the production companies of the What’s Love Got to Do With It?

Read more about “What’s Love Got to Do With It?” on IMDb.

Cast of What’s Love Got to Do With It?

Joshua Collins as The Earnest Man

17 thoughts on “Jemima Goldsmith; What’s Love Got to Do With It?”