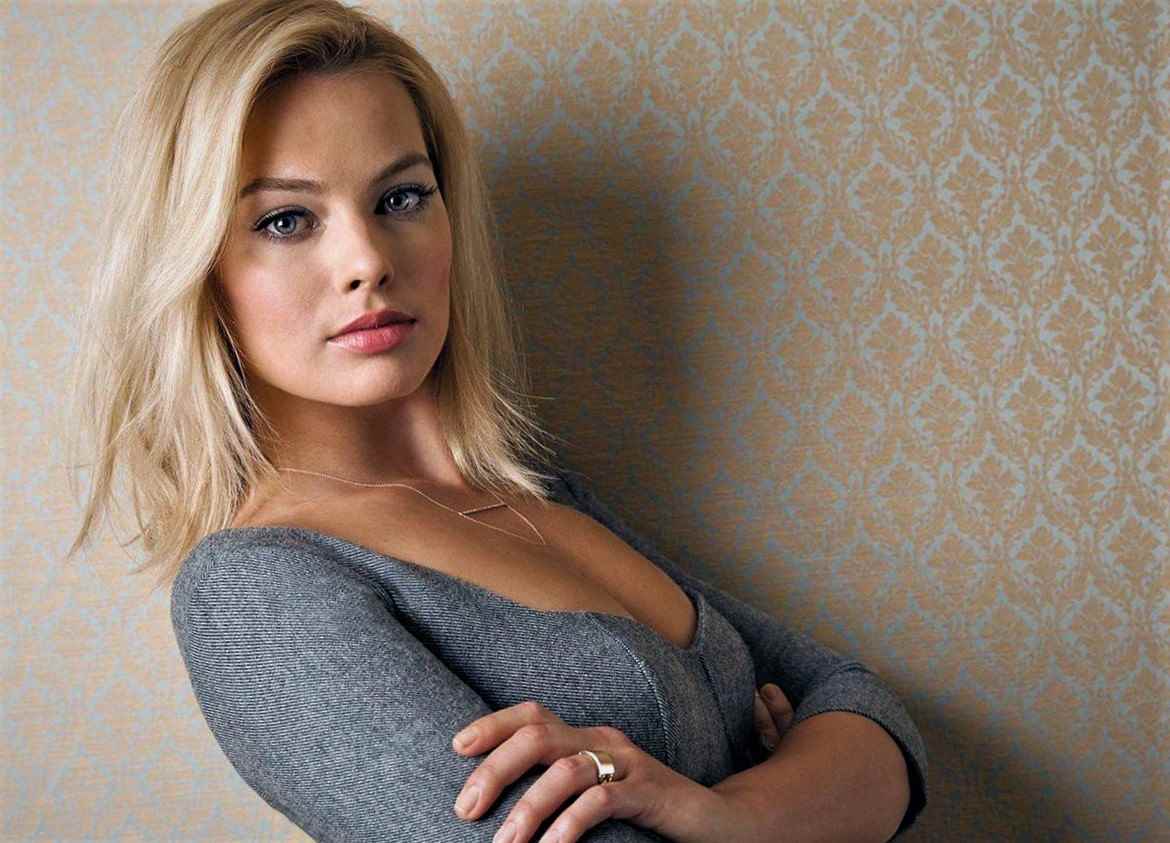 Margot Robbie is one of Australia’s most recognized faces around the globe. She is an Australian film producer and actress. She was ranked among the 100 most influential people in the world by Time magazine in 2017, and she was included in the list of the world’s highest-paid actresses by Forbes in 2019. She is one of the most successful Australian actresses in Hollywood. Margot Robbie has received two Golden Globe awards nominations, two Academy Awards (Oscars) nominations, and five BAFTA awards nominations, up until now. Robbie and her husband Tom Ackerley founded LuckyChap Entertainment, among other people in 2014. LuckyChap Entertainment has released many movies, and a TV series Dollface, which began airing in 2019.

Her full name is Margot Elise Robbie, she was born in Dalby, Queensland in Australia, on July 2, 1990. Her father Doug Robbie used to do farming, and her mother Sarie Kessler is a Physiotherapist. Margot Robbie has a sister, Anya, and two brothers; Cameron and Lachlan. Robbie’s mother was a single mom, and they used to live on a farm in Gold Coast Hinterland when she was a child. Her father was not around while growing up, so they had serious financial problems. At the age of 16, she had to work three jobs to support her family. At a time Margot Robbie was working at a bar, at a Subway, and she also cleaned houses to make some money. She was a student at Somerset College, where she studied drama and acting. She graduated from Somerset College in 2017 at the age of 17, and moved to Melbourne, to pursue a career in acting.

In 2007, she began her professional acting career by auditioning for different roles in several movies, serials, and commercials. She won the lead in I.C.U. without an agent after impressing the director with her performance during an audition. Robbie started her professional acting career in 2007 with roles in the films ICU and Vigilante. At the beginning of her career, Margot Robbie did some commercials too. She also appeared as a guest star; as Caitlin Brentford in City Homicides, and as Juliet in The Elephant Princess. In 2008, she joined the cast of Neighbours as Donna Freedman. Her role as Donna was supposed to be a guest role, but soon she became a regular cast member. Robbie featured in a variety of Network Ten advertisements in early 2009, alongside a number of other well-known Australian faces. In July 2009, she appeared on Network Ten’s Talkin’ ‘Bout Your Age as a guest as “Generation Y.” Later that year, Margot Robbie was nominated for the Australian Logie Awards for Most Popular New Female Talent.

Robbie revealed in September 2010 that she would be leaving Neighbours after almost three years to pursue a career as an actress in Hollywood. Her final scenes on the show Neighbours aired on January 26, 2011, and Robbie was nominated for the Logie Award for Most Popular Actress again, in April of that year.

Margot Robbie auditioned for the upcoming Charlie’s Angels series after landing in Los Angeles for pilot season. Producers at Sony Pictures Television, on the other hand, preferred her for a role alongside Christina Ricci in the ABC drama Pan Am. Robbie was cast as Laura Cameron, a newly eligible flight attendant, but the show was canceled after one season because of bad ratings.

Along with Domhnall Gleeson, Rachel McAdams, and Bill Nighy, Robbie joined the cast of Richard Curtis’ romantic comedy About Time (2013). On September 4, 2013, About Time was released in the United Kingdom, and on November 1, 2013, it was released in the United States. This film was a big success, it grossed over US$87 million, and it received very good reviews. Robbie’s international breakthrough came when she was cast as Naomi Belfort, the wife of protagonist Jordan Belfort, in Martin Scorsese’s The Wolf of Wall Street (2013). She co-starred with Leonardo DiCaprio and Jonah Hill. With favorable reviews and a worldwide gross of US$392 million, it was a commercial success. It was Martin Scorsese’s highest-grossing film of all time. The Wolf of Wall Street was one of the most successful movies in 2013. Following that, the film received five Academy Award nominations, including Best Picture. Critics lauded Robbie’s performance in particular for her Brooklyn accent as Naomi Belfort. “She’s Scorsese’s best blonde bombshell discovery since Cathy Moriarty in Raging Bull,” critic Sasha Stone wrote. Robbie received the Best Newcomer award at the Empire Awards and was nominated for an MTV Movie Award for Best Breakthrough Performance in a Leading Role. Robbie launched her own production company, LuckyChap Entertainment, with her husband, in 2014. Robbie appeared in the romantic comedy-drama film Focus with Will Smith in 2015. She plays an aspiring thief who learns the trade from Smith’s character in the film. Focus grossed over US$150 million worldwide, and it received mixed reviews, but Robbie’s performance was loved.

In 2016, she appeared in a film by Paramount Pictures, Whiskey Tango Foxtrot. In this film, she co-starred with Tina Fey, Martin Freeman, and Alfred Molina. She played the role of Tanya Vanderpoel, a British Journalist. In the same year, she co-starred with Samuel L. Jackson, Christopher Waltz, and Alexandra Skargrad in The Legend of Tarzan by David Yates. Harley Quinn in Warner Bros.’ DC Comics supervillain film Suicide Squad was Robbie’s third appearance in 2016. Will Smith, Jared Leto, Viola Davis, and Joel Kinnaman were among the ensemble cast members of Suicide Squad. Suicide Squad was released on August 5, 2016. Although the film as a whole received mixed reviews, Robbie’s portrayal of Quinn was highly praised.

In 2017, Robbie co-starred in Goodbye Christopher Robin alongside Domhnall Gleeson as Daphne de Sélincourt, author A. A. Milne’s wife. She then starred as American figure skater Tonya Harding in Craig Gillespie’s film I, Tonya. Robbie was nominated for an Academy Award in the Best Actress category, and a Golden Globe Award for Best Actress – Motion Picture Comedy or Musical for her depiction of Harding.

In 2017, Forbes included her on its 30 Under 30 list, and Time magazine listed her among 100 Most Influential People in the World.

Robbie played Flopsy Rabbit in the animated/live-action film Peter Rabbit, an adaptation of the Beatrix Potter book series, released in 2018. She then played Annie in Vaughn Stein’s thriller Terminal. She then appeared in Slaughterhouse Rulez as Audrey and in Mary Queen of Scots as Queen Elizabeth I, opposite Saoirse Ronan as Mary Stuart. Mary Queen of Scots received very bad reviews but Robbi’s portrayal of Queen Elizabeth I was admired. She was nominated for Best Supporting Actress at the BAFTA and Screen Actors Guild Awards.

In 2019 she co-starred with Leonardo DiCaprio, and Brad Pitt in Once Upon a Time in Hollywood, a comedy-drama by Quentin Tarantino. She played the role of Sharon Tate, a 1960s American actress. She read Roman by Polanski, by Roman Polanski, who was married to Tate, as part of her training. With an annual income of US$23.5 million, Forbes named her the eighth highest-paid actress in the world that year, and The Hollywood Reporter named her one of the top 100 most powerful people in entertainment. In the 2019 drama Bombshell, Robbie played Kayla Pospisil, a composite character based on multiple Fox News employees. She was nominated for two BAFTA awards for her roles in Once Upon a Time in Hollywood and Bombshell. She was also nominated for an Academy Award, a Golden Globe Award, and a Screen Actors Guild Award for Outstanding Performance by a Female Actor in a Supporting Role, for her performance in Bombshell.

Robbie started the new decade by producing Emerald Fennell’s drama thriller Promising Young Woman (2020), starring Carey Mulligan. She spent three years producing the project under her production company after pitching the concept of a Harley Quinn film starring the Birds of Prey team to Warner Bros. in 2015. The film Birds of Prey was released in 2020. It was directed by Cathy Yan, and it stars Margot Robbie as Harley Quinn. The film was well-received by the critics.

Robbie can next be seen in The Suicide Squad as Quinn and as Flopsy Rabbit in Peter Rabbit 2: The Runaway. She’s signed on to star in and produce a film adaptation of Matt Ruff’s suspense novel Bad Monkeys, as well as play Maid Marian in a biopic. She will also co-star with Christian Bale in Justin Kurzel’s war thriller Ruin. Ruin is co-written by Greta Gerwig, David O. Russell, and Noah Baumbach. Margot Robbie will also appear in a sequel of the Pirates of the Caribbean film franchise.

Margot Robbie has been nominated for several film awards in different categories.

She has been twice nominated for an Academy Award (Oscar).

She has been nominated for a Golden Globe Award four times.

Robbie met British assistant director Tom Ackerley on the set of Suite Française in 2014, and the two married in Byron Bay, New South Wales, in December 2016. She and Ackerley previously shared a three-bedroom house in London with five other friends. Since then, they’ve relocated to Los Angeles.