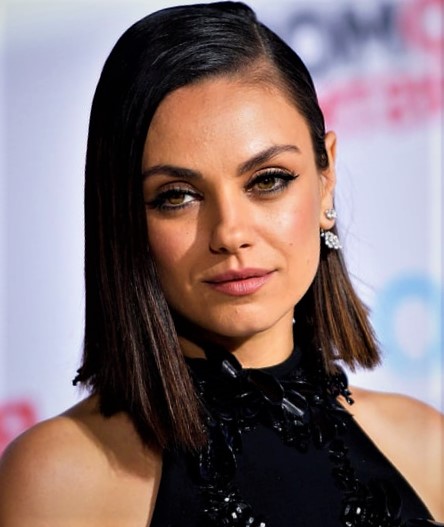 Mila Kunis is one of the most beautiful and most talented American actresses. She began acting in 1998 when she was fourteen years old with her role as Jackie Burkhart in the Fox television series The ‘70s Show (1998-2006). And as of 2021, Mila Kunis is one of the most successful Hollywood stars. Mila Kunis has received many awards and nominations for her performances on television and in movies. She has been nominated for a Golden Globe Award and a SAG Award in the Best Supporting Actress category and has received a Marcello Mastroianni Award in the Best Young Actress category.

Her full name is Milena Markovna Kunis. She was born in Chernivtsi, Ukrainian SSR, in the Soviet Union, on August 14, 1983. Her father Mark Kunis was a mechanical engineer who used to drive a cab, and her mother Elvira was a physics teacher who used to run a medical store. She also has an elder brother, Michael. She spent her early day with her family in the USSR. Her parents had good jobs and they had a good life. But they decided to move to the United States because they wanted a good future for Mila Kunis and her Brother. They moved to Los Angeles in 1991, when Kunis was only 7 years old.

After some time she got admission to Hubert Howe Bancroft Middle School. At the time she had got the role of Jackie Burkhart in That ‘70s Show, so she had an on-set tutor to help her study. After middle school, she attended Los Angeles Center for Enriched Studies, but when the school did not allow her to miss classes for her acting jobs, she left the school and got admission to Fairfax High School. In 2001 she graduated from Fairfax High School.

Her father got her into the Beverly Hills studio for acting classes after school, where she met Susan Curtis, who later became her manager. She was cast for the role of Barbie in a Barbie commercial on her first audition. Soon after, she was hired for a Lisa Frank product commercial. She made her television debut with an appearance in the soap opera Days of Our Lives in 1994. In the same year, she appeared as a guest in Baywatch. Kunis then did a minor role in 7th Heaven. She also did a supporting role in several productions such as Santa with Muscles, We Shrunk Ourselves, Honey, and Gia, an Angelina Jolie movie, in which she played young Gia Carangi.

She auditioned for a role of a migrant Russian Jewish girl in Make a Wish, Molly, but did not get that part, instead, she was cast for the role of a Mexican girl.

In 1998, Mila Kunis auditioned for and got the role of Jackie Burkhart in That ‘70s Show, which was a Fox sitcom. It was announced that all who auditioned for the role of Jackie Burkhart must be at least 18 years old. Kunis was 14 years old at the time, she told the casting directors that she would be 18 soon enough, but did not tell them when. They eventually figured it out, but they thought that she was perfect for the role so they decided to give her the part. This was an opportunity of a lifetime for her. For her performance as Jackie Burkhart, she received two consecutive Young Star Awards in the Best Actress in a Comedy TV Series category in 1999 and 2000.

Then in 1999, Mila Kunis was hired to play the voice of Meg Griffin in the Fox sitcom Family Guy which is created by the writer and actor Seth MacFarlane. She actually replaced Lacey Chabert who played Meg in the beginning. During the audition, MacFarlane told Kunis to enunciate more, and speak slowly. He told her to come back another time. She then worked on her voice and came back to get the part. Once she claimed that she could do it, she got the part.

While talking about Mila Kunis’s performance as Meg Griffin, Seth MacFarlane said, “What Mila Kunis brought to it was in a lot of ways, I thought, almost more right for the character. I say that Lacey did a phenomenal job, but there was something about Mila – something very natural about Mila. She was 15 when she started, so you were listening to a 15-year-old. Oftentimes with animation, they’ll have adult actors doing the voices of teenagers and they always sound like Saturday morning voices. They sound oftentimes very forced. She had a very natural quality to Meg that really made what we did with that character kind of really work.” Kunis also did the voice of Meg in the 2006 Family Guy Video Game. She received an Annie Award nomination in the Voice Acting in an Animated Television Production category in 2007.

Mila Kunis appeared alongside Kirsten Dunst in the 2001 teen comedy film Get Over It. The following year she starred in the horror film American Psycho 2 (2002), a sequel to American Psycho (2000) which starred Christian Bale. American Psycho 2 was a critical and commercial failure. Even Kunis felt embarrassed over the film. She then got the lead in the film adaptation of Tony n’ Tina’s Wedding, which was film in 2004 but was released in 2007 to receive very bad reviews from the critics. The film was a total failure.

Then she starred as Michelle McAllister alongside Joe Heder in Moving McAllister, which was shot in 2005, but its release was also delayed. It was released in 2007 for a two-week run in theaters. It also received bad reviews from critics.

In 2007, Mila Kunis co-starred with Zoe Saldana in the romantic comedy-drama After Sex. Then she got the role of Sophie in Boot Camp, a 2008 psychological thriller, which received mixed reviews from critics. Boot Camp did not have a theatrical release, it was released on DVD in August 2009.

In the 2008 comedy film Forgetting Sarah Marshall, she co-starred with Jason Segel as Rachal Jansen. The film was co-produced by Judd Apatow. The film was released on April 18, 2008. Forgetting Sarah Marshall was a huge box office success. With its budget of $30 million, it grossed over $105.8 million worldwide. The film received very good reviews from the critics. It holds an 83% approval rating on Rotten Tomatoes, and a 7.1/10 rating on IMDb. Mila Kunis’s performance was especially praised by the critics. She received a Teen Choice Award nomination.

Later in 2008, she played the role of an assassin, Mona Sax, in the action film Max Payne, which was based on a video game. In this film, she played the female lead alongside Mark Wahlberg. For this role, she learned to handle guns and had boxing and martial arts training. Though Max Payne received very bad reviews it was a commercial success. It grossed over $85.8 million worldwide, against its budget of $35 million. She received another Teen Choice Award for her role in this film.

Breakthrough and Rise to Fame

Mila Kunis co-starred with Jason Bateman and Ben Affleck in the 2009 comedy film Extract. It grossed over $10.8 million on box office, and it received good reviews from the critics. Her performance in this film was praised by the critics. Roger Ebert criticized the film but he wrote of Kunis’s performance as “(she) brings her role to within shouting distance of credibility.” The director of the film Mike Judge had seen Kunis in Forgetting Sarah Marshal and wanted to cast her in Extract for the role of Cindy. On the other hand, Kunis stated that she was a huge fan of Judge’s film Office Space (1999), and she should do anything for this part.

She then co-starred with Denzel Washington in the 2010 post-apocalyptic action film The Book of Eli. The film was a huge commercial success, grossing over $157 million worldwide. The film received generally mixed reviews, but Kunis’s performance was praised. Richard Roeper praised her performance by calling it a “particularly strong piece of work.” Many other critics pointed out her performance to be the best thing about the film. Mila Kunis received another Teen Choice Award nomination for her role in The Book of Eli (2010). In 2010, she played a minor role in the comedy film Date Night, which starred Tina Fey and Steve Carell. Her acting got her several positive reviews.

Later in 2010, she co-starred with Natalie Portman in the psychological horror film Black Swan. Natalie Portman played the lead role of a ballet dancer, while Mila Kunis played her rival dancer. Darren Aronofsky cast her in the film on the basis of her performance in Forgetting Sarah Marshall, and on Portman’s recommendation. Black Swan was released on December 3, 2010, in the United States. Upon its release, it was a huge commercial and critical success. With its budget of $13 million, it grossed over $330 million worldwide. The critics loved the film and gave it very good reviews, including admirations for Kunis and Portman.

She made her next appearance in the 2012 American comedy film Ted, in which she co-starred with Mark Wahlberg. The creator of Family Guy Seth MacFarlane co-wrote and directed Ted (2012). MacFarlane initially thought that Kunis was too young to play the role of Wahlberg’s character’s girlfriend in the film, but after a long period of development of the script, he eventually did cast her in the film. This film was also a huge commercial success, grossing over $549 million worldwide. It also received good reviews along with praises for Kunis’s performance. HitFix’s Drew McWeeny described her performance as “(she) brings some lovely subtle grace notes to a role that easily could have just been ‘the pushy girlfriend'”.

She appeared in Walt Disney Pictures’ prequel Oz the Great and Powerful (2013). In this film, she starred opposite James Franco. Though the film received mixed reviews from critics, it was a commercially successful movie. Her next film in 2013 was the American crime thriller Blood Ties which had a limited theatrical release in the United States. It received both good and bad reviews.

In late 2013, she played Julia Weiss in the romantic drama film Third Person. James Franko, Liam Neeson, and Olivia Wilde were the other stars of the film. The film premiered at the 2013 Toronto Film Festival and had a limited release in the United States. Third Person (2013) also did not do well at the box office, and it also received mostly bad reviews. But Kunis’s acting skills were admired by some critics.

In 2014, she appeared alongside Peter Dinklage and Robbin Williams in the comedy Drama The Angriest Man in Brooklyn, which was a total commercial and critical flop.

Mila Kunis is very well-known for her comedic roles. She has appeared in many comedic movies and has received praise for her funny/comedic acting skills. Some of her most praised comedic movies are Annie (2014), Bad Moms (2016), A Bad Moms Christmas (2017), The Spy Who Dumped Me (2018), Wonder Park (2019), and Breaking News in Yuba County (2021).

She will next produce and star in the Netflix film adaptation of Luckiest Girl Alive, a Jessica Knoll’s novel.