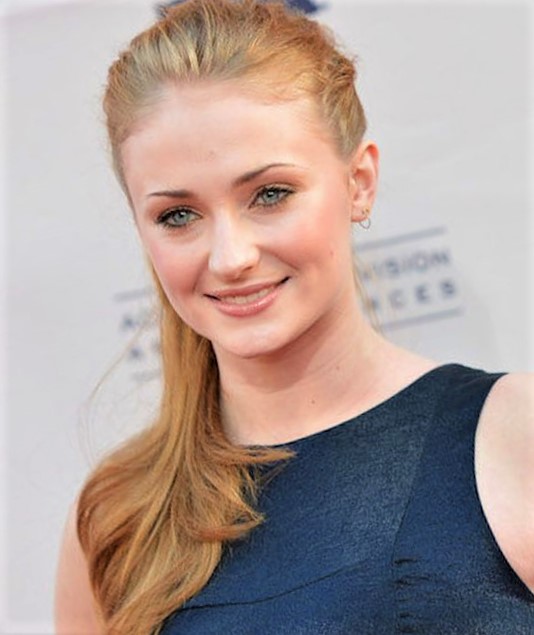 The English actress Sophie Turner is well-known around the world for her role in the HBO television fantasy series Game of Thrones (2011-2019), as Sansa Stark. This role was her first-ever acting job, which turned out to be a role of a lifetime. For her role as Sansa Stark, she received a Primetime Emmy Award nomination in the Outstanding Supporting Actress in a Drama Series category in 2019.

Sophie Turner’s net worth is around $8 million.

Her full name is Sophie Belinda Turner, she was born on February 21, 1996, in Northampton, England. Her mother Sally was a nursery school teacher and her father Andrew worked for a pallet distribution company. She had two older brothers, while her twin died before birth. She moved to Chesterton, Warwickshir with her parents when she was 2 years old. Until the age of 11, she went to Warwick prep school, then she got admission to the independent The King’s High School for Girls.

From the age of three, she was a member of the theater company Playbox Theater Company. Sophie and her brothers grew up in a big Edwardian house, near Leamington Spa. She once said that her childhood was pretty fun, they had pigsties, barns, and a paddock, and used to play in the mud. In 2013, when she was 16 years old and working in Game of Thrones, she had a tutor on set to teach her and help her prepare for GCSE exams. She took the GCSE and scored five A-grades and four Bs, including a B grade in Drama.

At the age of thirteen, she auditioned for a role in an HBO drama series Game of Thrones, when her drama teacher encouraged her to audition for the part.  In August 2009, she joined the cast of Game of Thrones as Sansa Stark, a young noblewoman. This was turner’s first-ever television role. The filming of GOT began in July 2010, at the time Turner had just turned 14. For her role as Sansa Stark she dyed her blond hair auburn, although, from season 7 of the show, she started wearing wigs. She received nominations from many major and small awards for her role, including a nomination for Young Artist Award for Best Performance in a TV Series – Supporting Young Actress, in 2012, alongside Maisie Williams, who played the role of Arya Stark, Sansa’s sister.

Game of Thrones was a fantasy series based on the war between nine families to control and rule the mythical land of Westeros, and on the other hand, another force is rising beyond the North, which is a threat to the survival of all mankind. The Game of Thrones has eight seasons. Sophie Turner is one of the lead characters of the show, who has played one of the main roles in every season. Game of Thrones is one of the highest-rated series on several websites. It has an 89% approval rate on Rotten Tomatoes, 9.3/10 rating on IMDb, and 9/10 rating on TV.com.

Sophie Turner made her movie debut with her lead role as Fay Delussey and her evil twin Layla, in the 2013 psychological thriller drama Another Me, which was based on Catherine MacPhail’s novel of the same name. She then starred in The Thirteenth Tale (2013), a television film, which was also based on a novel. Turner played the role of Adeline March, this was a horror film.

In the same year, she got one of the main parts in Barely Lethal, an American action comedy film. In this film, Sophie Turner co-starred with Hailee Steinfeld, Jessica Alba, and Samuel L. Jackson. The film premiered in May 2015. It received mixed reviews from the critics.

She has also narrated books, such as the audiobook version of “The Girl in the Mirror”, a short story by Lev Grossman, which was edited by George R. R Martin and was included in Dangerous Women, a short fiction anthology. She has also narrated the audiobook City of Heavenly Fire, by Cassandra Clare, in 2014. Later that year, she became the Karen Millan’s “The Journey”.

In 2016, she played the role of Jean Grey; a mutant who is scared of her telepathic and telekinetic power, in the American superhero film X-Men: Apocalypse. In this film, she co-starred with James McAvoy, Jennifer Lawrence, Oscar Isaac, Michael Fassbender, and others. The film received mixed reviews from critics. The overuse of CGI and the portrayal of the Apocalypse was criticized while themes, direction, and the performances by the actors were praised. The film was a commercial success, it grossed over $543.9 million against its budget of $178 million.

In the 2016 summer, she was the host of the web video Powershift in partnership with the Huffington Post.

She played the lead role of Juliane Koepcke in the movie Girl Who Fell From the Sky, she will also produce this film. The film is yet to begin its shooting. In March-April 2018, she was on set of  Heavy, an independent film, which was being filmed in Toronto, Ontario, Canada. In this film, she played one of the lead roles of Madeline. The film received mixed reviews.

In 2019, she reprised her role as Jean Grey, in a sequel of X-Men, Dark Phoenix, which premiered in June 2019. The film did not do good on the box office, with its budget of $200 million, it only grossed $252 million dollars. And it also received negative reviews from the critics, but the performance of the cast received a lot of good reviews.

She then joined the cast of the show Survive, an adventure thriller drama, alongside Corey Hawkins. The show is based on Alex Morel’s novel of the same name. It has one season and twelve-episode. Survive has received very good reviews.

She has also appeared in a music video  Oblivion by Bastille.