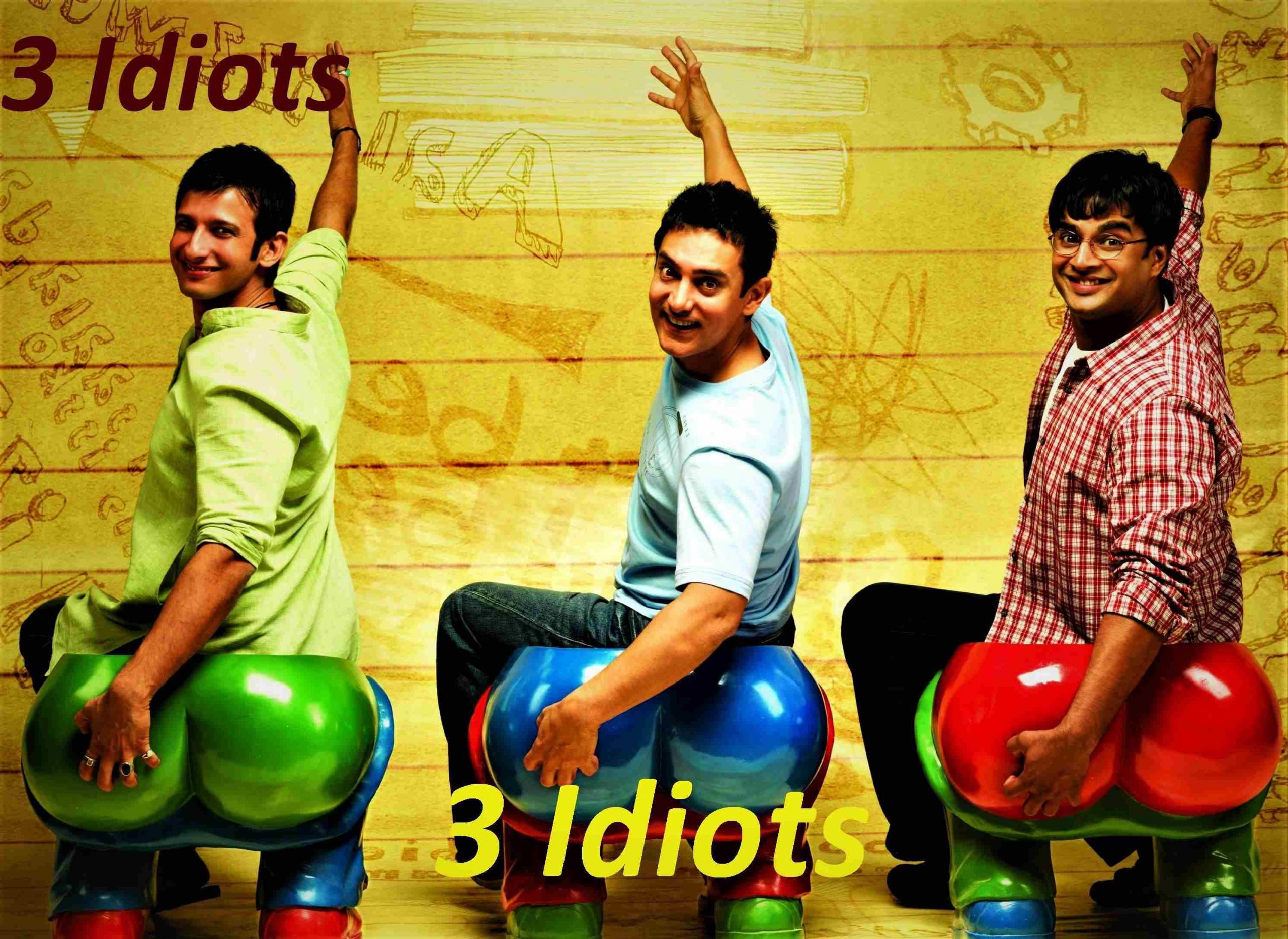 3 Idiots is directed by Rajkumar Hirani, who is also the director of Sanju, Munna Bhai M.B.B.S and PK, and it is produced by Vidhu Vinod Chopra who is also the producer of Munna Bhai M.B.B.S, Parinda, and Shikara. The film 3 Idiots is based on a novel; Five Point Someone: What not to do at IIT, which is written by Chetan Bhagat, but he was not credited in the film. The Film stars Aamir Khan and Kareena Kapoor in the leading roles. 3 Idiots received very good reviews from critics and movie lovers all around the world upon its release. 3 Idiots was the highest-earning film on its opening weekend, it hit the highest opening day collections at the time, and held the record for a Bollywood film for the highest net collections in the first week. 3 Idiots achieved enormous success in East Asian countries such as China and Japan, it is one of the very few Indian movies to succeed in these countries. 3 Idiots earned around  $90 million, it was the most earned by a Bollywood film at the time. 3 Idiots was also included in the Guinness World Records for hitting the highest box office film gross by a Bollywood film. The film has its own legacy of a social impact in the Indian educational system as well as in China.

3 Idiots was also nominated for foreign film awards, including Beijing International Film Festival in 2011, and Japan Academy Awards in 2014.

In 2013 3 Idiots beat all the movies released that year and was named 2013’s best video release.

3 Idiots is based on a novel by Chetan Bhagat; Five Point Someone: What not to do at IIT. This movie tells the story of three boys who get admission in the ICE engineering college, and face the problems created by the educational system and teaching methods, that almost every student in India faces. It is the story and almost perfect presentation of the intense and pressure circumstances that most of the students face in India and around the world.

Farhan Qureshi, Raju Rastogi, and Rancho get admission to the engineering department of the Imperial College of Engineering in Dehli. Right from the beginning, they are told by their dean and professors that they have to put everything in life aside and just focus on their textbooks. They are told that they have to work very hard to pass the exams and become engineers, and are told that no one is special, everyone must do what’s best for themselves and forget about everything and everyone else. Students at ICE also face the extreme form of bullying from their seniors.

Then Rancho comes to the university. He is roommates with Farhan and Raju. Rancho has a very different opinion about the educational system, teaching methods, social expectations, and lifestyle. He thinks that studies should not be this hard, a college should not be like a pressure cooker, living a simple life should not be frowned upon, everyone should be able to realize and choose what’s best for himself, and everyone should lead a life they want to lead. Everyone should select the field and line of work that they understand and enjoy. He thinks when a young mind realizes what field or line of work he can work in the best, and can enjoy working in it, or realizes its passion, it is the best thing that could happen for it. He should pursue that passion and should lead a life that could mean something to him.

Rancho’s other friend Raju Rastogi is also admitted to the ICE college. Raju belongs to a very poor family and has an ill father and an unmarried sister. Raju is supposed to become a successful engineer, get a job, and provide for his family, and earn enough money to provide the dowry for his sister, so that she can marry. Raju is always making his ultimate effort to get the best results in the exam, he is always intense about studies, and always worried about getting a job right after the completion of his degree, but even after studying for hours every day, he does not make good results in exams. Raju is so pressurized by these circumstances that at one point he tries to commit suicide. But Rancho makes him believe that you don’t have to worry all the time and work this hard to get results. He tells him to focus on learning stuff and making an understanding of it. He tells him to have a good attitude about life, and start believing that something good will turn up for him. After resisting and rejecting for a long time, Raju understands what Rancho has been telling him, and starts to have a good attitude towards life, and starts believing in himself. As a result, he gets a good job from an engineering company that comes to the college to interview and give jobs to students, even before they are graduated.

There are many other lessons in 3 Idiots, and if a person starts living his life according to those lessons, it will be very easy for him to lead a happy and successful life.

3 Idiots has also highlighted the intensity and pressure of educational systems, and social expectations around the world, which could be the main reason for so many teen suicides.

All of these issues should be addressed, and be worked on.