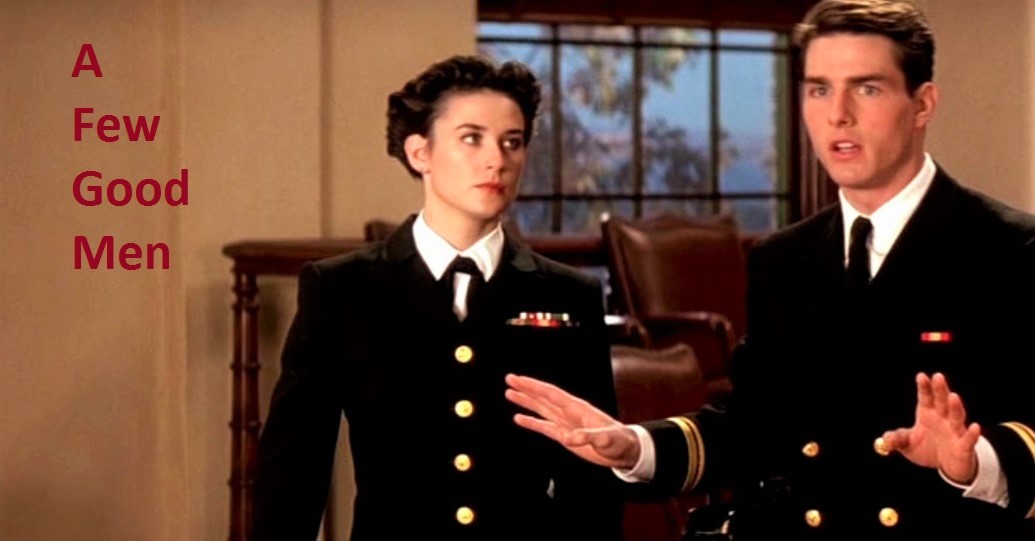 Cast of A Few Good Men

Tom Cruise: as Lieutenant Daniel Kaffee, an inexperienced lawyer in the U.S Navy.

A Few Good Men is a 1992 legal drama film, in which at the Guantanamo Bay Naval Base two U.S marines Lance Corporal Harold Dawson and Private First Class Louden Downey are accused of the murder of their fellow marine William Santiago. Santiago did not have good relations with his fellow marines and is considered a substandard marine. He wanted to be transferred to another base, so he broke the chain of command by offering information on Dawson’s illegal firing over the fence line to Naval Investigation Service, in exchange for a transfer. Colonel Jessup (base commander) holds a meeting in his office to discuss the issue with his executive officer Lieutenant Colonel Mathew Markinson and Santiago’s commanding officer lieutenant Jonathan James Kendrick. Markinson suggests that Santiago should be transferred off the base immediately. But colonel Jessup disagrees with him and orders Lieutenant Kendrick to discipline Santiago and give him a code red; a violent off-record punishment (which is ordered to not be practiced), to help him become a better marine. Lieutenant Kendrick orders Dawson and Downey to give Santiago a code red. Dawson and Downey go into Santiago’s room, tie him up and put a rag into his mouth. Santiago could not take it, and he dies an hour later. The attending physician reports that the rag was treated with some mysterious poison, which caused Santiago’s death. Dawson and Downey get arrested on the spot and are accused of murder. The case file says that Dawson wanted to kill Santiago because Santiago named him in an illegal fence-line shooting and was willing to provide information on the issue.

Lieutenant Commander JoAnne Galloway, a lawyer, and Naval investigator looks into this case and she believes that there was no intent to kill. She believes that they were only giving him a code red, she also believes that they were ordered to give a code red by their commanding officers, and both Dawson and Downey are innocent. She discusses the issue with her commanding officers and expresses her wish to defend the two. But they give this case to Lieutenant Daniel Kaffee, who is an inexperienced and unenthused lawyer, who has never been in a courtroom and is well known for plea bargains. He wants to cut a deal for Dawson and Downey with the prosecutor captain Ross and says that they should plea bargain. This way they will get ten years in prison and will be out of prison in five years. Kaffee tries that they take the deal, as he thinks that they had no chance if the case went to trial, but Dawson refuses to choose a plea bargain and he insists on fighting the case in court. He becomes angry at Kaffee, as Kaffee wants them to enter into a plea bargain. He says that Kaffee had no honor and refuses to salute him. Kaffee now gets mad at Dawson and tells Galloway that he will request the judge to remove him as their counsel and assign someone else. Galloway tries to convince him to take their case to court and fight for them. Somehow at the arraignment, Kaffee enters in a not guilty plea.

He starts his investigation and prepares a case in which he tries to prove that Dawson and Downey are not guilty as there was no intent to kill, and Dawson and Downey were only following orders. Prosecutor Ross tries to prove in court that; Dawson wanted to kill Santiago, he put poison on the rag and put it in Santiago’s mouth, there is no such thing as Code Red, Santiago was to be transferred off the base on the next flight, there is no officer involved in this incident. Kaffee calls different army officers as witnesses and puts up a good case. He tries to prove that; rag was clean and there was no poison on it, Santiago had a medical condition which caused his death, there was no intent to kill, they were ordered to give Santiago a code red, Santiago was never to be transferred off the base and the officers lied about the order of his transfer. Later while questioning private Downey, Ross proves that Downey did not get direct orders from any senior officer and he was ordered only by Lance Corporal Dawson. This makes the case more difficult if not impossible, for Kaffee to win.

Kaffee thinks that the only chance they had now is if colonel Jessup admits that he gave the order for a code red, so calls Colonel Jessup to the stands and asks him a series of confusing questions, colonel gives reasonable answers and remains calm, Kaffee asks about contradictions in his answers and his orders. Kaffee repeatedly asks the colonel if he gave the order of a Code Red. At this point colonel is so annoyed by his questions and is very angry at Kaffee, he tells Kaffee that he had no honor and starts to explain the importance of the army and himself in a loud voice, at that point Kaffee again asks him if he ordered the Code Red, colonel is so annoyed with this question and Kaffee’s intimidating behavior that he yells that he indeed ordered a code red. Then Jessup stands up and tries to leave the courtroom but is arrested on the spot by the judges’ order.

As it is proved that Dawson and Downey were ordered to give a code red they are cleared off the charges of murder and conspiracy to commit murder and are dishonorably discharged from the U.S. Marine Corps. Dawson accepts the decision but Downey doesn’t understand why they were discharged, then Dawson tells him that they were supposed to protect their fellow marine Santiago.

At the end Dawson salutes Lieutenant Kaffee and calls him an officer.