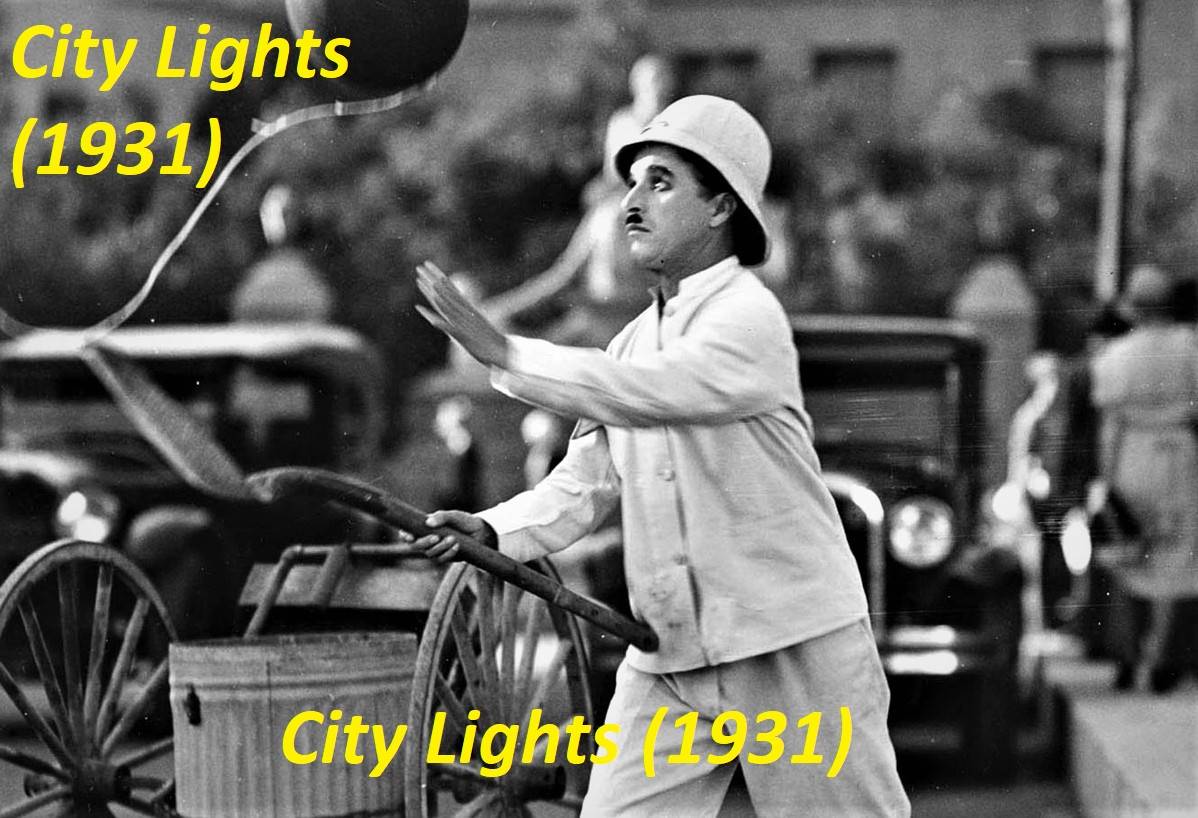 Virginia Cherrill Lead Role as “as a Blind Girl”

Hank Mann as a “Prizefighter”

Harry Myers as an an “Alchoholic Millionaire”

Al Ernest Garcia as his “Butler”

City Lights is one of the most successful and important films of the silent era of the film industry. The film was released at the time when cinema was being introduced to the Talkies. At the time when silent films were being cast out of the game, the film City Lights stood its ground and grossed over $4.25 million worldwide, which was a huge success at the time. According to critics, this film is Chaplin’s Greatest Achievement. It got good reviews and responses all over the world and is still considered one of the greatest films ever made.

Charlie Chaplin is the Writer, Producer, Director, Music writer, and the Lead Role of City Lights. He also played his role in the editing of the film. Charlie Chaplin wrote the script for City Lights in mid-1928 and started filming it in December 1928. It took around 2 years to finalize the film. In September 1930 the film was complete. It was Chaplin’s decision to make it a silent film, even though Talkies (Voice Films) were leading the industry at the time. The film was released on January 30, 1931. It made a huge success upon its release, people around the world loved it, and critics gave it good reviews and called it one of the best films ever made. The film’s story, plot, music, direction, and acting of Charlie Chaplin is appreciated and valued by critics all over the world. In 1991, the Library of Congress included City Lights in the National Film Registry of the United States. The American Film Institution listed City Lights on number 11 on its list of Best American Films Ever Made, in 2007.

The film City Lights tells the story of a Tramp (Charlie Chaplin) who has a disturbing friendship with an Alcoholic Millionaire (Harry Myers), and He finds himself in Love with a Blind Girl (Virginia Cherrill).

The Tramp buys flowers from a girl on the street and realizes that she is blind, he finds her so beautiful that he immediately falls in love with her. At the same time, that blind girl mistakes him for a wealthy businessman. In the evening on the same day, the tramp encounters a man trying to commit suicide, so he saves him. Tramp realizes that he is a rich alcoholic. He takes him to his home, but later at night the rich man tries to commit suicide again on the street, but the tramp saves him again. The next morning tramp brings him to his home and watches the same flower girl selling flowers on the sidewalk. He borrows some money from his new suicidal rich friend and buys all the flowers from the blind girl. And offers her to drop her at her home in the millionaire’s car. She thinks that it’s the tramp’s car and agrees to go with him. When she gets home she tells her grandmother about her rich and kind friend who bought all flowers from her and just dropped her home in his car.

Then the tramp goes to see the blind flower girl but does not find her on the street-corner. He finds it odd and goes to her home, and over-hears a doctor telling her grandmother that she is very sick and needs proper attention. This makes him sad and he decides to help the poor family and gets a job as a street sweeper.

He visits the blind girl at lunch break while her grandmother is out, selling flowers. He reads to her from a newspaper a story about a doctor for blindness cure. To which she says that it would be wonderful because then I’ll be able to see you. Tramp is struck by hearing this because then she would know that he is not the rich man she thinks he is. Then he leaves and tells her that he would pay her rent.

When he returns to work that day he gets fired as he is often late. Then he meets a boxer who convinces him for a fake wrestling match, he tells him that they would go easy on each other and split the prize money after the match. But that boxer realizes that he is about to be arrested for and he flees. Then tramp is put in the ring with a real boxer, who knocks him out. (The boxing scene is one of the greatest and funniest scenes of the film. Tramp tries many creative and unconventional techniques to stay out of the boxer’s reach.)

After some time, the tramp is released from jail, he returns to the street-corner where the blind girl used to sell flowers, but he does not find her there.

Then the audience learns that the blind girl went through with the operation and can see now, and runs a successful flower shop with her grandmother, and she remembers her secret lover and benefactor.

The tramp one day passes by her shop and sees her working in there. He picks up a discarded flower from the gutter and realizes that the previously blind girl is looking at her. He freezes for a moment and then smiles at her. The girl also smiles and comes to him, she offers him a new flower in exchange for the discarded one and also offers him a coin. The tramp refuses to take the coin, but she takes his hand and puts the coin on his palm. She suddenly realizes the touch of his hand, and watches him in amazement, and asks “You?” to which he smiles and asks her “ You can see now?” she says, “Yes I can see now”. She then presses his hand on her heart and smiles at him as she has found him, He smiles back.