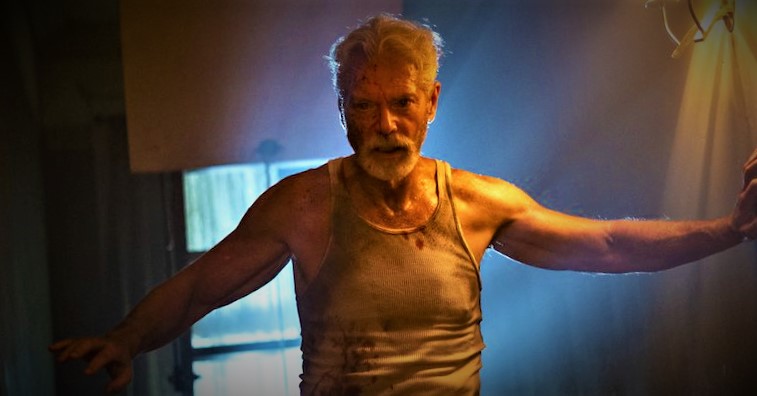 Don’t Breathe 2 (2021) is an American film based on thrill and horror which premiered in 2021, with Steplan Lang reprising his role from the first film. The film was directed by RodoSayagues and produced by Fede Alvarez, Sam Raimi and Robert Tapert. The film was distributed by Sony Pictures. The screen play was written by RodoSayagues and Fede Alvarez.

After the eight years of the incidents happened in first film, Norman Nordstorm “the blind man” lives with eleven years old girl Phoenix in his house. He told Phoenix that outside world is dangerous and full of evil people. He kept her safe in the house. Phoenix was not allowed to go outside alone. Hernandez an Army Ranger is the only connection between Norman and society, she convinces Norman to send Phoenix with her to town and he agreed. A biker tried to abduct Phoenix. When Hernandez safely dropped off Phoenix, the biker gang killed her and went to blind man’s house to abduct Phoenix.

The film received mixed reviews from the critics. The film grossed about $47 million against the budget of $15million. The first movie “Don’t Breathe” was more appreciated and loved by the audience. The approval rating on IMDb is 6.1/10 and 45% on Rotten Tomatoes. Stephan Lang acting was widely appreciated but the story of the movie is not strong enough to attract many audiences.

Regardless of the reviews the film received on online film rating websites and on magazines, Don’t Breathe 2 (2021) is an amazing and really good action, crime, horror film.

The character name of Stephan Lang is “Norman Nordstorm”

The dogs in the film didn’t receive any credits

The abandoned hotel in the film is present in Serbia

The film was produced by Fede Alvarez, who directed the first film “Don’t Breathe”

Stephen Lang as the blind man