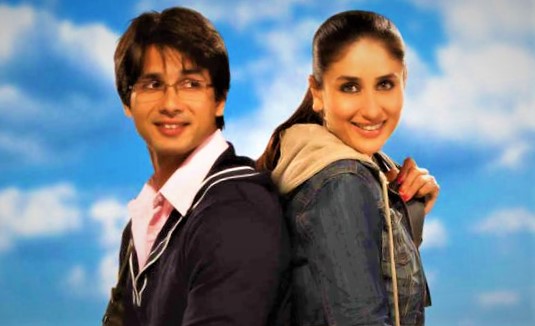 Jab We Met (2007) is an Indian Hindi language film which premiered in 2007. The film was written and directed by Imtiaz Ali. The film was produced by Dhilan Mehta under the banner of Shree Ashtavinayak Cine Vision Limited. Jab We Met is a romantic comedy. Kareena Kapoor and Shahid Kapoor played the lead roles of the film. Pavan Malhothra, Dara Singh and SaumyaTandon are the supporting cast of Jab We Met.

In the opening scene, Aditya Kashyp left his home and business in Delhi. Aditiya was depressed because his girlfriend married someone else. He met a Punjabi girl Geet Dhilon on train. While attempting to get back Aditiya on board, Geet missed her train. Both are stranded on the middle of nowhere. Aditiya was so under depression that he had no destination in mind, Geet forces him to accompany her back home and then elope with him to meet her secret boyfriend Anshuman.

Kareena Kapoor did the role of Geet Dhilon in the film, she was the director’s first choice according to the role. He knew that she will do justice to the role by being talkative and hyper but not irritating.

The producers first signed Bobby Deol for the role of Aditya Kashyp and they wanted to sign Kareena Kapoor as Geet. But Kareena refused the offer, Bobby asked producers to sign PreityZinta for the role but she was busy in some other shoot. Meanwhile Kareena reach out to producers and was ready to do the film only if they sign Shahid Kapoor instead of Bobby Deol. Producers give the part to Shahid Kapoor without even informing Bobby Deol.

Kareena Kapoor and Shahid Kapoor were dating in real life when they signed for the film.

The movie scenes were shot at Himachal Pardesh and Shimla.

The film is available on Netflix.