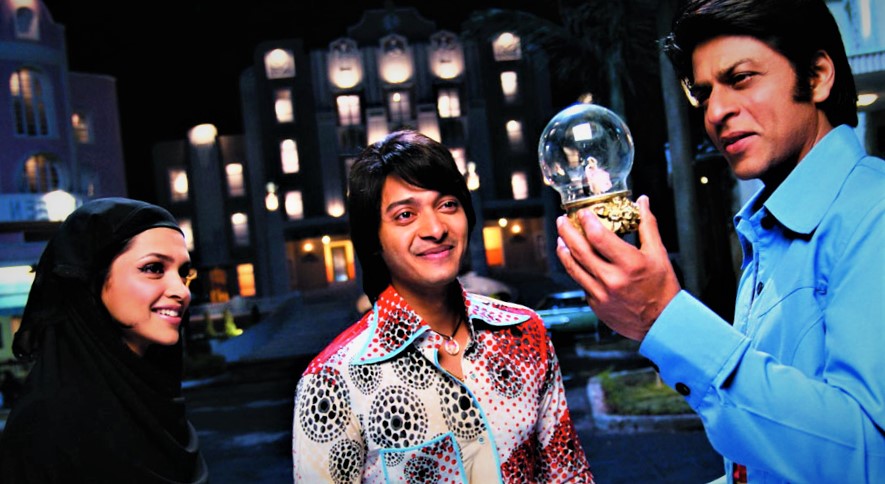 Om Shanti Om (2007) is an Indian film with a genre of comedy, fantasy, romantic and drama. Shah Rukh Khan and Deepika Padukone are the lead actors in the film. Arjun Kapoor, Kirran Kher and Shreyas Talpade also played major roles in the film. Many Bollywood celebrities appeared in different songs of the film.

This film was based upon the time span of three decades. Shahrukh khan played the role of Om, who has a huge crush on Shanti Priya, played by Deepika Padukone. The love interest of Shanti murdered her, Om witnessed the crime but got a lot of injuries and then died. Om reincarnated again in the world in 2007 and take revenge for Shantis’s murder.

The film was a blockbuster in India. The film got positive reviews from Indian critics. It grossed about $994 million in India and a worldwide gross of about US$29 million. Film got many nominations and won many awards. Deepika Padukone won the Filmfare Award for Best Female Debut. Farah Khan won the Best Choreography Award by Producers Guild Film Awards. The couple of SRK and Deepika won the Screen Award of Best Pair of the Year. Arjun Rampal won the award of Best Actor in Negative role by Zee Cine Awards. The film received a 6.7/10 rating on IMDb, and a 76% rating on Rotten Tomatoes.

Shahrukh khan work out for 3 months before shooting the song “Dard-e-Disco”.

It was Farah Khan’s idea to bring the khan of the industries together in one song, Aamir Khan refused the offer so she ended up filming Shahrukh khan, Saif Ali khan, Salman Kahan and Sanjay Dutt together in a song “Deewangi”.

Mona Ghosh Sheety, who is a dubbing artist, played the voice of Deepika Padukone in this film.

The line “I feel like king of the World” is taken from James Cameron speech when he won the Oscar for Titanic.

Om Shanti Om was a debut film of Deepika Pdukone and she was only 20 years old.

Shah Rukh khan worn an outfit in the song “Main agrKahon” is similar to that worn by Rajesh Khana in song “Mehbooba”.