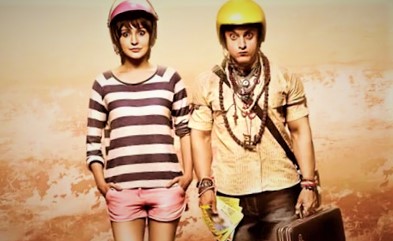 PK (2014) is an Indian film based on science fiction, comedy and drama. Aamir Khan,and Anushka Sharma are the lead actors in the film. Sushant Singh Rajput, Booman Irani and Sanjay Dutt also appeared in pivotal roles. The film was directed by Rajkumar Hirani and produced under the banner of Vinod Chopra and Hirani productions. The film received 8.1/10 approval rating on IMDb.

Aamir khan played a role of humanoid alien who came to Earth for research purposes. He had a remote to get in touch with his spaceship but someone stole his remote. Anushka played the role of a news reporter who helped Aamir to find his remote and get back home.

Pk premiered on December 19, 2014. The film received positive reviews from the audience. People mostly appreciated the acting skills of Aamir Khan and his portrayal of Pk character. The film was a blockbuster in India and it grossed about $854 crore worldwide. It was the first Indian movie to gross more than 7 billion worldwide and considered the 5th highly grossed film of 2014. The film got many nominations in different award shows. Aamir Khan won the Best Actor award by Bollywood Hungama Surfer’s Choice Award. Pk received the award of highest grossing film by ETC Bollywood Business Award. RajkumarHirani won the award of Best Director in International Inadian Film Academy Award.

Pk was the Bollywood’s highest grossing film ever.

The clothes worn by Aamir khan in the film were randomly collected from the public.

Sanjay Dutt was in jail at the release time of PK so Aamir khan set a special screen for him in jail to watch the film.

The film pk was the highest grsossing Indian film in China.

The son of Aamir Khan, Junaid Khan worked as a Assistant Director of the film.

Pk is the first film in which Aamir Khan and Sanjay Dutt worked together.

There are some plans regarding the sequel of the film.

Pk was declared the tax free film in Bihar and UtarPardesh regions.

Anushka Sharma give the audition for the film 3 Idiots but got role in pk.

This was the first Bollywood movie to earn 300 crores in India.

Pk was the fourth collaboration between Rajkumar Hirani and Booman Irani. The other three includes 2 films of Munna Bhai and 3 Idiots.