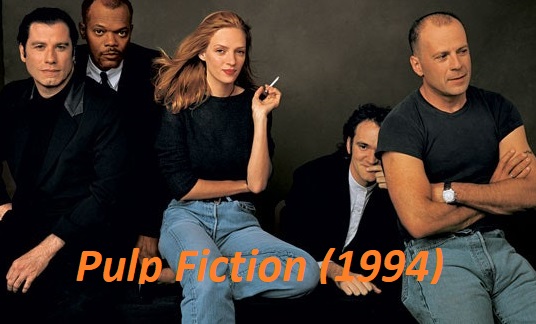 Pulp Fiction is one of the most famous and highest-rated films of all time. It appears in almost every Best Movie of all Time list. Pulp Fiction is a 1994 American crime and black comedy film which stars Samuel L. Jackson, John Travolta, Bruce Willis, Uma Thurman, Tim Roth, and Ving Rhames. The renowned and one of the most talented Hollywood directors Quentin Tarantino wrote and directed the film. Pulp Fiction (1994) follows the story of several Los Angeles criminals. Pulp Fiction’s title refers to the pulp magazines, which were known for their graphic violence and punchy dialogues. Pulp magazines were really famous during the mid-20th century.

Tarantino wrote the film Pulp Fiction in 1992 and 1993, he incorporated scenes that Roger Avary originally wrote for True Romance (1993). Pulp Fiction has an out-of chronological order plot, and it is also self-referential from its opening moments. In this film, all the main characters’ perspectives and ethics are really explained, and they are really introduced to the audience. Pulp Fiction is a dark comedy crime film, so there is a rare combination of strong violence, humor, and ethics. Reportedly, TriStar Pictures did not like the script too much and turned it down, as they thought that the film was too insane. Then Harvey Weinstein the co-chairman of the Miramax company read the script and loved it, and the Miramax company agreed to fully finance the film.

Upon its release Pulp Fiction was a huge commercial and critical success. The public loved the film’s story, dialogue, screenplay, and the acting by the main actors such as John Travolta, Samuel L. Jackson, Bruce Willis, and Uma Thurman. Pulp Fiction (1994) was a major box office success too. With its budget of just $8-8.5 million, it went to gross over $213.9 million worldwide. Pulp Fiction (1994) received several awards and nominations from different local and international award shows, including Academy Awards, Golden Globes, BAFTA, SAG, and more.

Pulp Fiction (1994) is considered the masterpiece of the director Quentin Tarantino. Its screenplay is loved and followed by other Hollywood directors. Tarantino co-wrote the screenwriting with Roger Avary for which they received an Oscar award in the Best Writing, Screenplay Written Directly for the Screen. This was the film that proved to be the breakthrough film for John Travolta, Samuel L. Jackson, and Uma Thurman, and made them famous around the globe. Jackson’s performance earned a lot of recognition and critical acclaim, in this film.

Entertainment Weekly named Pulp Fiction the Best Film since 1983, in 2008. Pulp Fiction is almost on every Best Movie of all-time list. The Library of Congress selected the Pulp Fiction (1994) for preservation in the United States National Film Registry for being “aesthetically, culturally, or historically significant.”

Pulp Fiction (1994) received a total of 145 award nomination from different local and international award shows, of which it won 70 awards.

The plot of Pulp Fiction

The plot of the film follows the lives of several hardened criminals of Los Angeles, separately. Two hitmen Vincent Vega (John Travolta) and Jules Winnfield (Samuel L. Jackson) are on a mission to find and recover a suitcase which holds something of importance, as their boss Marsellus Wallace (Ving Rhames) has instructed them. Wallace has also asked Vega to take his wife Mia (Uma Thurman) out for dinner and to party when he has to go out of town. An aging boxer Butch Coolidge (Bruce Willis) also has a deal with Wallace. Coolidge is paid by Wallace to lose his fights.

A series of bizarre, dark, funny, and unintentional events brings all of them closer to each other and things take unexpected turns.

In the scene in which Vincent puts a syringe into Mia’s chest, was actually shot by having John Travolta pull out the needle. And then they ran the film backward to make it look like he is putting the needle into her chest.

Pulp Fiction’s production budget was only $8 million, $5 million of which went to the actors and actresses’ salaries. The film became profitable when it sold its worldwide rights for $11 million. And this low-budget film went on to gross over $200 million worldwide. All thanks to Bruce Willis’ presence in the film.

The car Vincent Vega drives in the film was a convertible 1964 Chevelle Malibu. This car was actually owned by the director and writer of the film Quentin Tarantino. The car was stolen during the production of the film. In 2013, a police officer arrested two kids who were stripping a car. Upon his investigation, the police officer found out that this was Tarantino’s car which was stolen onset of Pulp Fiction in 1994.

At the beginning of the film when Vincent and Jules go to Brett’s (Frank Whaley) apartment to get the suitcase and kill him. Jules flips the table and points the gun into Brett’s face. This flipping of the table was not in the script, Samuel L. Jackson improvised it, so Frank’s reaction in the scene is genuine. This entire scene was shot in one take, and Tarantino loved this improvisation by Jackson and included it in the film.

The “Bad Mother Fucker” wallet which is used by Jules Winnfield (Samuel L. Jackson) in the film, is actually owned by Quentin Tarantino.

Quentin Tarantino wanted Uma Thurman to play the role of Mia in the film but she turned it down. Then Tarantino read the script to her over the phone and asked her to join the film, and she agreed.

There are a lot of abusive words used in Pulp Fiction. The word “Fuck” was used 265 times in the film.

All of the Bruce Willis’ scene was shot in just eight days. So he was there on the set of Pulp Fiction for only eight days.

Pulp Fiction was one of the first movies which used the internet for advertising.

The cast of Pulp Fiction