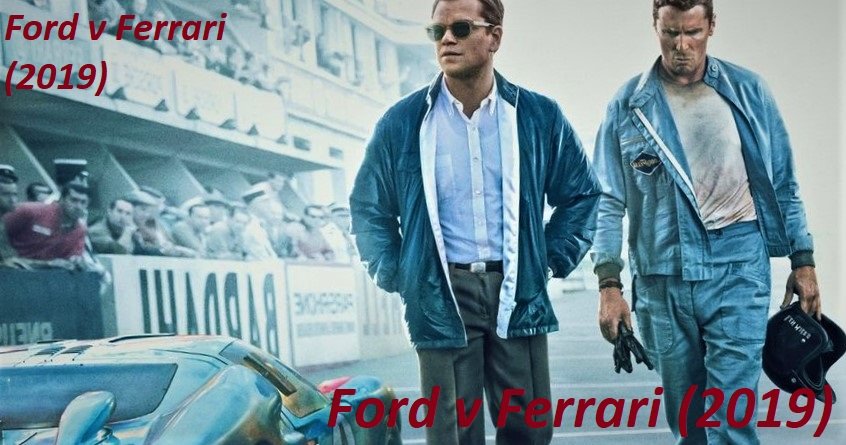 Ford v Ferrari had its world premiere on August 30, 2019, at the Telluride Film Festival, and was released in theatres in the United States on November 15, 2019, by Walt Disney Studios Motion Pictures’ 20th Century Fox division. Upon its release, the film was well-received by the critics and the public. Critics praised the performances (particularly those of Bale and Damon), as well as Mangold’s direction, editing, and racing sequences.

The National Board of Review named it one of the ten best films of the year, and it earned four Academy Award nominations, including Best Picture, and won Best Film Editing and Best Sound Editing at the 92nd Academy Awards. It was the last film to win an Academy Award for Best Sound Editing until the category was merged with Best Sound Mixing to form a new Best Sound award. For his outstanding performance, and a perfect British accent Christian Bale was also nominated for a Golden Globe award in the Best Actor – Drama category, and for a Screen Actors Guild Award for Outstanding Performance by a Male Actor in Leading Role. With its budget of $96.7 million, Ford v Ferrari grossed over $225.5 million worldwide.

In the mid-1960s, as Enzo Ferrari’s fast Rosso-Corsa racing cars dominate the motorsport scene, Carroll Shelby, an American car designer, is forced to retire after winning the grueling ’24 Hours of Le Mans endurance race in 1959. But, before long, an unlikely proposal from Henry Ford’s vice president, Lee Iacocca,  provides him an opportunity to beat the Italians at their own game. Now, under those pressures, Ken Miles, a British sports car driver, and racing engineer, reluctantly agrees to help and boost Ford’s reputation, despite the fact that the race team has less than ninety days to rewrite history. As a result, the unconventional pair creates the legendary Ford GT40 Mk I high-performance racing car. Will Shelby and Miles be able to end Ferrari’s winning streak?

In 1963, Ford Motor Company Vice President Lee Iacocca recommends to Henry Ford II that the company purchase the cash-strapped Italian Ferrari in order to boost car sales by competing in the 24 Hours of Le Mans. Enzo Ferrari, on the other hand, takes advantage of Ford’s bid to secure a more lucrative contract with Fiat, allowing him to keep full control of Scuderia Ferrari. Ferrari deliberately insults both Ford Motor and Henry Ford II by refusing the proposed contract with Ford.

As a result, an enraged Ford orders his racing division to build a car capable of defeating Ferrari at Le Mans. Iacocca enlists the support of Carroll Shelby, the owner of Shelby American, a former driver who won the Le Mans race in 1959 but had to retire due to a heart problem. As a result, Shelby enlists the assistance of Ken Miles, a fiery British racer and struggling mechanic who also happens to be Shelby’s best friend.

At Los Angeles International Airport, Shelby and Miles put the Ford GT40 Mk I prototype to the test, ironing out all of its design defects before it’s race-ready. Ford sends Phil Hill and Bruce McLaren to the 1965 24 Hours of Le Mans instead of Miles because they believe he is not their ideal driver. None of the Fords finish the race, as Miles predicted. Although Ford sees this as a humiliating loss, Shelby tells him that the GT40 scared Enzo Ferrari by reaching 218 mph (350.8 km/h) on the Mulsanne Straight before breaking down. Shelby and Miles continue to work on the GT40 Mk II, but Miles is nearly killed during testing when the car develops brake fade.

In 1966, Ford Senior Vice President Leo Beebe takes over the racing division, intending to continue the program without Miles. However, Shelby offers Ford a ride in the car and wagers his own company to persuade Ford that if Miles wins the 24 Hours of Daytona, he will be able to compete at Le Mans. Shelby American competes at Daytona, but Beebe has a second Ford entered with sponsorship from NASCAR team Holman-Moody. Despite the fact that the Holman-Moody team has faster pit stops, Shelby has Miles drive his car to the 7,000 RPM tachometer redline and win the race.

Miles struggles with a faulty door during the first lap of the 1966 24 Hours of Le Mans, but after team engineer Phil Remington fixes it with a mallet, Miles starts setting lap records and catching up to the Ferraris. Miles has brake failure while racing with Ferrari driver Lorenzo Bandini in the new prototype 330 P3, and his brake system is replaced during his pit stop. Enzo Ferrari objects, but Shelby persuades race officials that the substitution is legitimate. On the Mulsanne Straight, Miles and Bandini battle it out once more before Bandini blasts his engine, putting the Ferrari out of the chase. With three Ford teams in the lead, Beebe instructs Shelby to make Miles slow down so that the other two Fords can catch up to him and have a three-car photo finish for the public.

Miles initially opposes this decision, continuing to set new lap records towards the end of the race, but on the final lap, he agrees to let Ford have their way. Despite the fact that McLaren is proclaimed the winner on a technicality, Miles thanks Shelby for giving him the chance to race at Le Mans.

Miles suffers another brake failure two months after Le Mans, while testing the J-car at Riverside International Raceway, and is killed in the ensuing crash. Shelby pays Miles’ widow Mollie and son Peter a visit six months later, giving Peter a wrench Miles threw at him before winning an SCCA race at Willow Springs in 1963. Ford’s winning streak at Le Mans began in 1967, 1968, and 1969. Miles was inducted into the Motorsports Hall of Fame of America after his death in 2001.