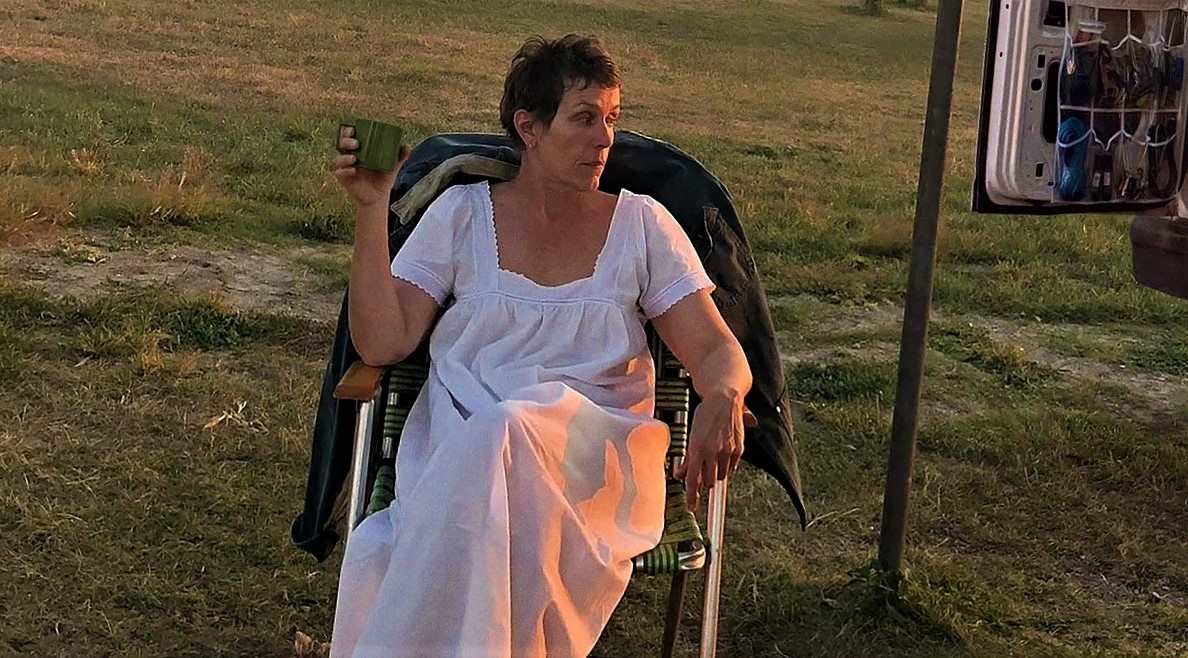 The American drama film Nomaland is produced, directed, written, and edited by Chloe Zhao. Nomaland tells the story of a woman (Frances McDormand) who leaves her hometown of Empire, Nevada after her husband dies and the sole industry closes down to be “houseless” and travel around the United States. Nomaland (2020), is based on Jessica Bruder’s 2017 book, Nomadland: Surviving America in the Twenty-First Century.

Nomadland premiered at the Venice Film Festival on September 11, 2020, and received the Golden Lion. At the Toronto International Film Festival, it also received the People’s Choice Award. The film earned universal acclaim for its direction, screenplay, editing, cinematography, and performances, especially McDormand’s, becoming the third-highest rating film of 2020 on Metacritic, which considered it to be the most frequently ranked as one of the best films of 2020 by critics and publications. Nomaland (2020), is nominated for six Academy Awards (Oscar). At the 78th Golden Globe Awards, it was nominated for four awards, of which it won two awards in Best Motion Picture and the Best Director categories. With the Best Director win, its director Chloe Zhao became the first Asian woman to win this award, and the second woman overall.

A woman in her sixties embarks on a journey through the American West as a van-dwelling modern-day nomad after losing everything in the Great Recession. Fern packs her van and sets out on the road after the economic failure of a company town in rural Nevada, seeking a life as a modern-day nomad outside of traditional society.

Fern loses her job in 2011 when the US Gypsum plant in Empire, Nevada closes; she had worked there for years with her husband, who had recently passed away. Fern decides to sell most of her belongings and buy a van to live in while looking for work around the country. During the winter, she works at an Amazon fulfillment center as a seasonal employee.

Fern is invited to a desert rendezvous in Arizona arranged by Bob Wells, which offers a support structure and group for fellow nomads, by Linda, a friend, and coworker. Fern initially declines, but as the weather turns colder and she struggles to find work in the city, she reconsiders. Fern meets other nomads at the gathering and learns basic survival and self-sufficiency skills for the trail. When Fern’s van blows a tire, she goes to a nearby nomad called Swankie’s van and asks for a ride into town to get a replacement. Fern is chastised by Swankie for not being prepared and is invited to learn more road survival skills; the two become good friends. Swankie informs Fern of her cancer diagnosis and shortening life expectancy, as well as her plan to make happy memories on the road rather than rot in a hospital. They part ways at some point.

Fern later works as a camp host at Badlands National Park’s Cedar Pass Campground, where she meets David, another nomad she met and danced with back in the desert city. David is working at Badlands National Park on a temporary basis, but when he becomes ill, Fern pays him a visit to the hospital where he has undergone emergency surgery. Later, the two of them work as waiters at Wall Drug in South Dakota. One night, David’s son comes to the restaurant in search of him, telling him that his wife is expecting a child and inviting him to meet his grandson. David is apprehensive, but Fern persuades him to go. David invites her to join him, but she refuses.

Fern starts a new job at a sugar beet processing facility, but her van breaks down, and she is unable to pay for repairs. She visits her sister’s family in California because she is unable to borrow money. Her sister is the one who loans her the money. She wonders why Fern was never in their lives and why she remained in Empire after her husband died, but she praises Fern for being so self-sufficient. Fern later pays a visit to David and his son’s family, where she discovers that David has chosen to live with them permanently. He admits to having feelings for her and invites her to live with him in a guest house for the rest of her life, but she leaves after just a few days and heads to the beach.

Fern resumes her seasonal Amazon work and returns to the Arizona rendezvous later. She learns of Swankie’s death there, and she and the other nomads pay homage to her life. Bob learns about Fern’s loving friendship with her late husband, and Fern tells him about his son’s recent suicide. Bob believes that in the nomad culture, goodbyes are never permanent because everyone still promises to see each other “down the road.”

Fern returns to the nearly-abandoned town of Empire sometime later to get rid of the things she’d been storing in a storage unit. Before returning to the lane, she pays a visit to the factory and the house she shared with her husband.

Linda May as Linda

Bob Wells as Himself