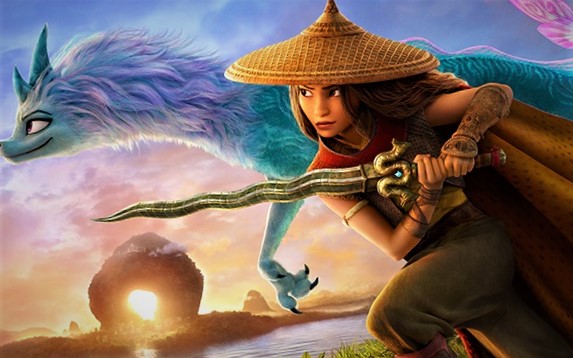 Raya and the Last Dragon is a co-production of Walt Disney Pictures and Walt Disney Animation Studios. It is a computer-animated fantasy action film. It was released on March 5, 2021, even though the global Covid-19 pandemic has a very negative effect on theatrical releases of the movies with most of the cinemas being closed around the world, but Raya and the Last Dragon has performed well. It grossed over $86 million which made it the 7th highest-grossing film of 2021 so far. The film was also available on Disney+ and Premier Access.

Raya and the Last Dragon has received very good/positive reviews from the public and from the critics. Rotten Tomatoes called it “gorgeously animated and skillfully voiced”. The film has a 94% rating on Rotten Tomatoes. On Cinema Poll it was given “A” on an “A+” to “F” scale, and on PostTrack it was given a positive score by 92% of the audience. Rolling Stone’s David Fear also gave it a very good review(3.5/5). It holds a 7.4/10 rating on IMDb and a 75% rating on Metacritic. The general public especially the children loved the film because of its beautiful animation and very cool characters.

Watch Trailer of Raya and the Last Dragon

Cast of Raya and the Last Dragon (Voice)

Kelly Marie Tran as Raya; Kumandra’s Heart Land’s strong and courageous warrior princess, who has been training to become a Guardian of the Dragon Gem. She sets out in pursuit of the last dragon to bring peace to Kumandra.

Awkwafina as Sisu; a goofy young water dragon who is the last of her kind in existence.

Izaac Wang as Boun; a dynamic ten-year-old entrepreneur and owner of the Tail Land’s “Shrimporium,” a boat restaurant.

Alan Tudyk as Tuk Tuk; Raya’s trusted steed, who is a cross between an armadillo and a pill bug.

Criticism on the Cast

Raya and the Last Dragon was criticized for its lack of Southeast Asian representation in the cast, despite the fact that the film is set in a fictional Southeast Asian country. With the exception of K. Tran, Butler, T. Tran, Wang, and Harrison, the majority of the cast is of East Asian descent.

Amazing Facts about Raya and the Last Dragon

Plot of Raya and the Last Dragon

Long ago, in Kumandra’s fantasy world, humans and dragons coexisted peacefully. When the land was invaded by sinister creatures known as the Druun, the dragons sacrificed themselves to save mankind. The same creatures have returned 500 years later, and it’s up to a lone warrior to hunt down the last dragon and put an end to the Druun once and for all.

Kumandra is a peaceful land overrun by Druun, evil spirits who petrify people and multiply by absorbing their life energy. The Kumandra dragons used their remaining magic to make an orb to ward off the Druun and resurrect everyone, but they themselves turned to stone. Due to a power struggle over the orb, Kumandra’s people are divided into tribes based on their location along a giant river that resembles a dragon: Fang, Heart, Spine, Talon, and Tail.

500 years later, Chief Benja of the Heart tribe has been training his daughter Raya to protect the orb, confident that the tribes can once again be unified. Raya befriends Namaari, the daughter of Chief Virana of the Fang tribe, during a feast among the five tribes, and she gives Raya a dragon pendant as a gift. Raya shows Namaari the orb’s location because she trusts her, but Namaari has gathered members of her tribe to steal the orb. When the other tribes arrive, they battle for the orb, which breaks into five parts. The Druun reappearance occurs as each tribe steals apiece, with Benja being one of the casualties.

Raya spends the next six years looking for Sisu, the dragon who is said to have formed the orb and the only remaining member of her race, to assist her in recovering the orb’s missing parts. She eventually summons Sisu while in the former territories of the Tail Tribe, who acknowledges that she did not make the orb but can use its powers. The second piece is found in a ruined Tail shrine, and it grants Sisu shapeshifting abilities. They are targeted by Namaari and her tribe, but young entrepreneur Boun, who has lost his family to the Druun, assists them in escaping. Despite Boun’s friendliness, Raya has reservations about him.

Raya meets “con girl” Little Noi and her trio of monkey-like friends, the Ongis, who adopted her after the Druun killed her mother when they arrived at Talon to claim the third orb piece. Raya takes her in after a chase, while Sisu goes into town and meets Talon’s chieftess, who threatens her. Sisu is rescued by Raya, who reclaims the third piece, allowing Sisu to spew fog.

Raya and Sisu encounter Tong, a formidable warrior and the village’s lone survivor, when the party arrives at Spine. The rest of the party catches up with them and warns them about Namaari’s impending arrival. Raya fights her off in a battle while the others flee with the help of Sisu. Back on the boat, Raya tells her party the truth about Sisu, and they agree to work together, with Tong handing Sisu Spine’s orb piece, which grants her control over the rain.

Sisu recommends asking for the final piece rather than stealing it as they get closer to Fang. When Raya declines, Sisu takes her back to the Heart’s ruins and tells her how her siblings trusted her to save Kumandra. Raya finally gives in and agrees to give Namaari the dragon pendant as a peace offering, putting her journey to a close. When Raya and Sisu meet privately with Namaari, Namaari threatens them after seeing the orb bits. Sisu attempts to reason with her, but is accidentally shot by Namaari and falls into a river that quickly dries up.

Raya enters to confront Namaari, who is grieving the loss of her mother, as Fang is targeted by the Druun. While Raya’s companions save the people from the Druun, the two fight. Raya plans to murder Namaari, but when they see her guilt, they decide to help her friends instead. Raya tells her friends that they need to reassemble the orb as the Druun approach, but her friends refuse to forgive Namaari. Raya gives Namaari her piece and lets the Druun take her as a sign of confidence. Namaari fixes the orb until the Druun captures her, and the rest follow suit. The Druun are defeated and everyone, including Sisu and the other dragons, is brought back to life after the orb is reassembled.

Raya and her father are among those who have been reunited with their long-lost loved ones. The dragons and tribes assemble at Heart to rejoice and reunite to form Kumandra once more.

Leave a Reply to click this site Cancel reply