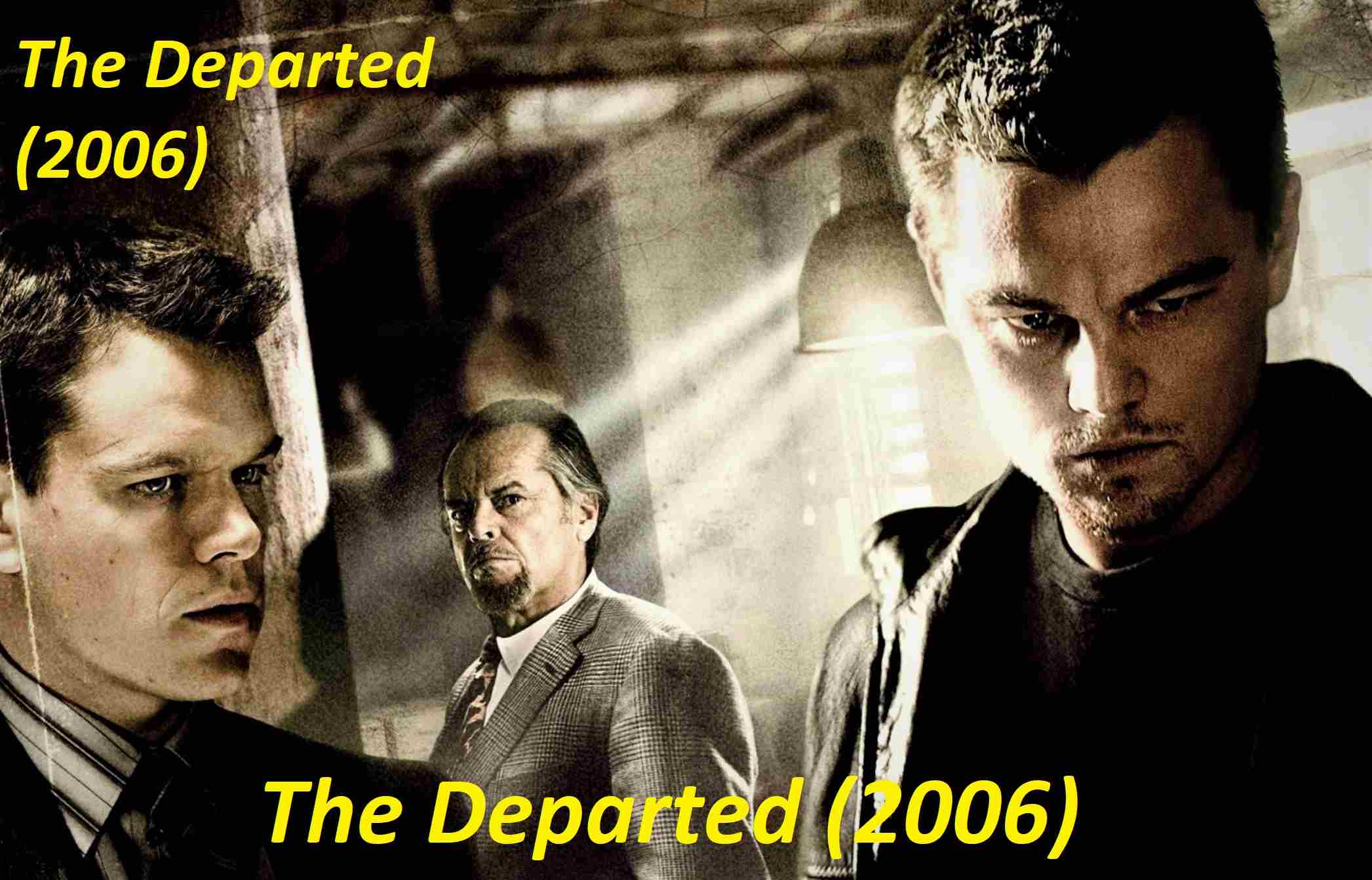 The American crime thriller The Departed (2006) is Martin Scorsese’s one of the best movies. The Departed (2006), is the remake of the action thriller Infernal Affairs (2002), which was produced by Cinema of Hong Kong. William Monahan wrote the story and screenplay of The Departed, who gave the film a touch of the real-life story by including in it a real-life Boston Winter Hill Gang, and the characters like Colin Sullivan, based a real-life corrupt FBI agent John Connolly, and Frank Costello, based on a real-life Irish American gangster Whitey Bulger. The Departed (2006) stars some of the best Hollywood actors such as Leonardo DiCaprio, Jack Nicholson, Matt Damon, Mark Wahlberg, Alec Baldwin, Martin Sheen, and more.

The Departed premiered on October 6, 2006, in the United States. Upon its release, it was well-received by the public and by the critics. It was one of the most well-received films of 2006. It appeared on more than 36 critics’ top 10 movie lists. In 7 lists it was ranked on #1. As of now, it holds a 90% approval rating on Rotten Tomatoes, 8.5/10 rating on IMDb, and 85% ratings on Metacritic. The Departed has stood the test of time, and it still appears on almost every crime action thriller movies lists. The Departed (2006) was a huge commercial success too. With its budget of $90 million, it grossed over $291 million on box office. It also received many awards and award nominations, including Golden Globe, Academy (Oscar), and BAFTA awards.

The South Boston state police have decided and are determined to crush an Irish American gang, but they have to gather intel and evidence against the gangsters. Billy Costigan (Leonardo DiCaprio), a young undercover cop, is given the task to enter the gang as a criminal and gain access to the gang boss Frank Costello. On the other hand Colin Sullivan (Matt Damon), a dirty cop who works as an informant for the gang has found his way into the Special Investigation Unit. They both live double lives and gather main and very dangerous information on the plans and counter plans of the two sides, but soon enough the two sides find out that there is a mole on each side. So the lives of Billy and Colin are now endangered. They both have to find out the identity of the other man in order to save their lives.

Watch The Departed (2006) Live on gototub.com

The Departed 2006 (Awards and Nominations)

The Departed (2006) was nominated for 141 local and international awards in different categories, of which it received 97 awards.

Amazing Facts about The Departed (2006)

Production Company, Director, and Producer of The Departed (2006)

A very young Colin Sullivan is introduced to an Irish Mob boss, Frank Costello in 1986. 20 years later, Sullivan has become a police officer in the Massachusetts State Police, but he works as a mole for Costello. He joins the Special Investigations Unit, led by Captain Ellerby.

Billy Costigan Jr. is another cop who is given the task to go undercover and join the Costello gang, to gather intel on them, and help the police department to take action against the mafia. They send Costigan to jail under a phony charge to set up a cover for him. When he gets out of jail he joins Costello’s gang. Ellberly tells the Special Investigations that only Captain Queenan and Staff Sergeant Dignam, who asked Costigan to go undercover, will know the true identity of the undercover cop in the Costello’s crew. He also informs them that the Costello gang has got their hand on some very important computer microprocessors and they are going to sell them to the Chinese.

Costigan worried for his life, is very depressed by this situation, and wants to stop this undercover operation. But Queenan and Dignam inform him that there is a mole/a dirty cop in the Special Investigations. They tell him to stay close to Costello until the deal with the Chinese takes place. At this point, both sides know that there is a mole on every side. So the lives of Costigan and Sullivan are endangered. They both have to find out soon that who the other mole is.

On the other hand, Colin Sullivan starts a romantic relationship with Madolyn Madden, a police psychiatrist, whom Costigan visits on occasions as a part of his probation.

The Massachusetts Police Department is ready to take action and catch Costello red-handed while selling the microprocessors to the Chinese, but they are unable to do so, as the deal is done off-camera and everyone escapes. At this point Costello realizes that someone in his crew is working for the police, so he tasks Sullivan to find the rat. Sullivan asks him to give details about his crew members so he can run their names on the police database and cross-check. Costello accuses Costigan of being a rat but he denies it. At the same time, Costigan finds out that Costello has an informant in the FBI, so he tells Queenan that Costello has a police informant and is also aware that there is a mole in his gang.

Costigan then follows Costello when he goes into a theater where he meets with Sullivan and hands him an envelope. Costigan asks Queenan if he should arrest them. Queenan tells him that he must get a visual ID of Sullivan before he makes the arrest. So Costigan chases him, but he is unable to see his face clearly. Sullivan learns that someone is following him, and gets ready to kill him. but he accidentally kills another person and escapes. Sullivan realizes that he and Costigan were captured on a security camera. He tries to cross-reference officers but cannot recognize Costigan.

On the other hand, Queenan tells Costigan to follow Costello in order to identify his rat in the FBI. Costigan asks Queenan to meet him. Sullivan tails Queenan and tells Costello that Queenan is meeting the undercover cop. Costello sends his men to kill the undercover cop, but Queenan helps him escape, and confronts them, and is murdered. Dignam is furious when he learns that Queenan has been killed by Costello’s crew, so he attacks Sullivan.

Then the story takes a twist and Sullivan learns that Costello is an FBI informant. So Sullivan helps the MSP catch Costello. Costigan tails Costello to a drop-off, where a gunfight erupts. All Costello’s men are killed there except a few. Costello admits that he is an informant when Sullivan confronts him, so Sullivan shoots him.

Costigan then decides to reveal his undercover identity to Sullivan but finds the envelope that Costello had given to his Police informant. He learns that Sullivan is the rat, and flees. Sullivan then erases Costigan’s records from the police database. Costigan approaches Madden and hands her an envelope and tells her to open it if something happens to him.

Madden currently is living with Sullivan and is pregnant with his child. She opens the envelope that Costigan gave her. She finds tapes inside of Costellos’s meetings with Sullivan. She now knows who Sullivan really is and leaves him.

Costigan then meets with Sullivan on a rooftop and arrests him. Costigan has asked Trooper Brown, his friend from the academy, to prove his true identity, but Brown unsure of which one of them (Costigan and Sullivan) is telling the truth, pulls a gun on Costigan. Costigan tells Brown that he has evidence to prove that Sullivan is a rat and worked for Costello. So Brown lets him go and he (Costigan) enters the elevator with Brown, to go down. When they reach the lobby Trooper Barrigan kills them and reveals that he too worked for Costello. Sullivan then shoots Barrigan and leaves the building.

At the end of the film, Sullivan arrives at his apartment where Dignam is waiting to kill him. Dignam shoots him in the head and leaves. As Dignam exits the apartment the camera pans to a rat crawling across the balcony.